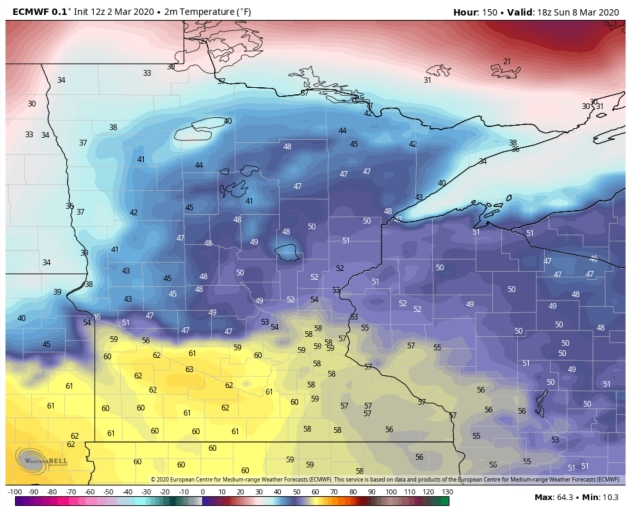 Spring Fever in a Minnesota March?

It may be bad timing to talk about “feeling feverish” but like many of you I have an itch that a scratch won’t reach. Spring fever has come early this year. 50F felt amazing Sunday, and ECMWF (European) guidance hints at 60F on Sunday. It’s hard to imagine, but much of the dirty snow in your yard will melt in the next
week or so.

There was no El Nino to warm us up this winter, just unusually powerful jet stream winds trapping brutally cold air well north of Minnesota. Meteorological winter was roughly 3F warmer than average, and March looks pretty mild from everything I’m seeing.

This reminds me a little of 2012, when shrubs were flowering by late March. We’ll see. Expect more slaps of cold and spits of snow. It would be premature to write off winter entirely.

No big storms are brewing, just Thursday showers from a weak clipper, and a taste of late April this weekend with 50s, maybe 60F if we melt enough snow.

And to think, a cold November had many of us thinking it would be another tough winter. 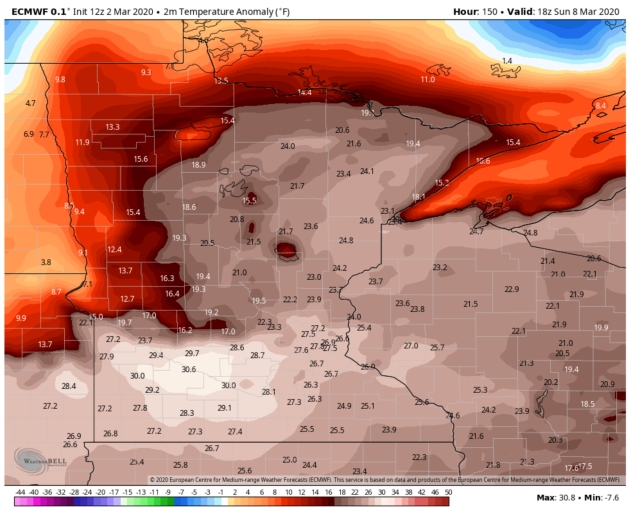 Freakishly Mild Sunday Brewing. 20-30F warmer than average Sunday afternoon across much of Minnesota? That’s what the European model is forecasting. If you don’t have spring fever yet just give it a few days. 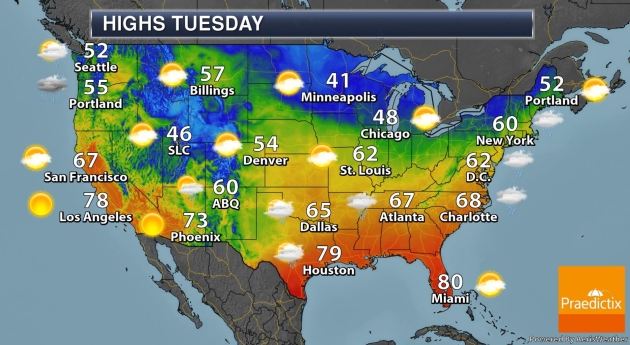 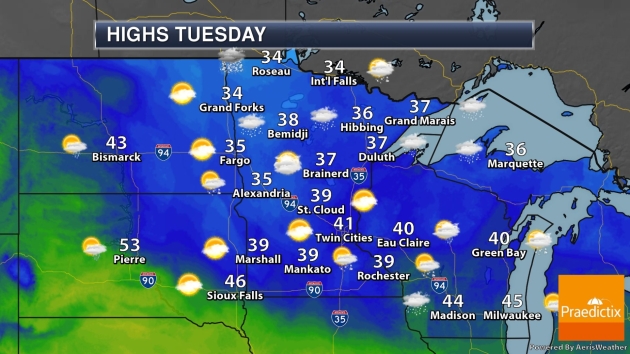 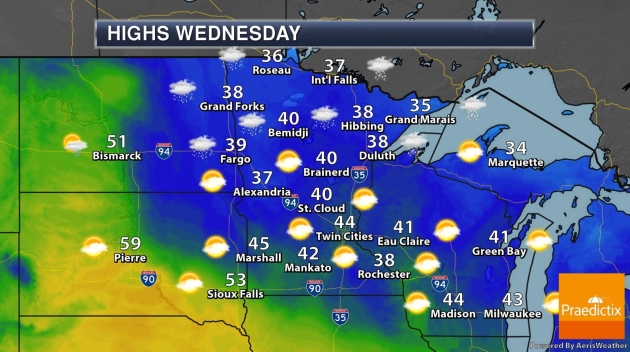 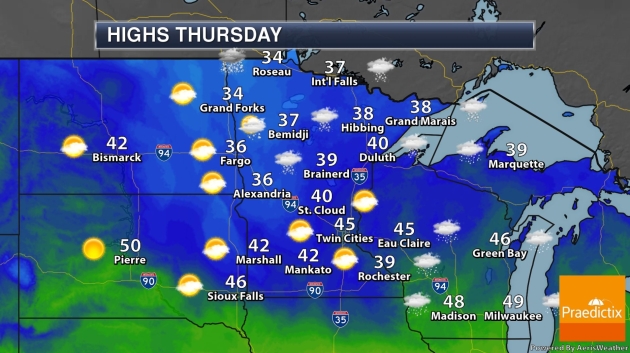 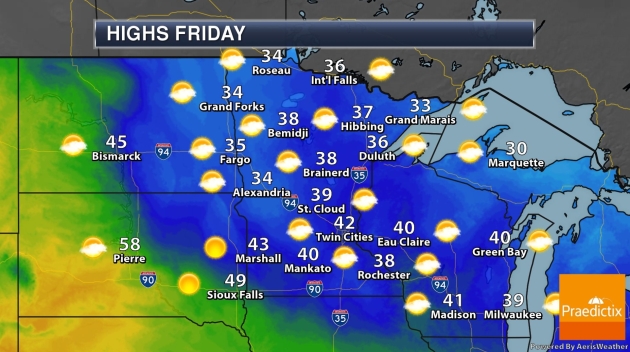 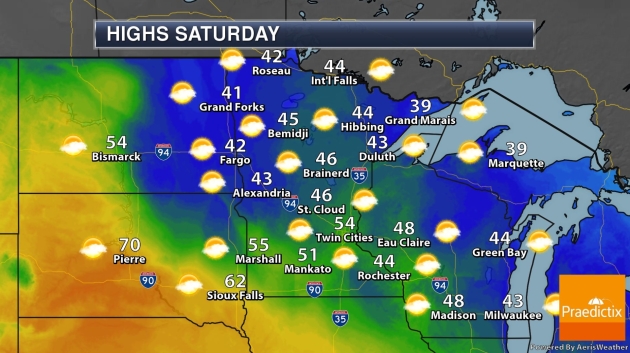 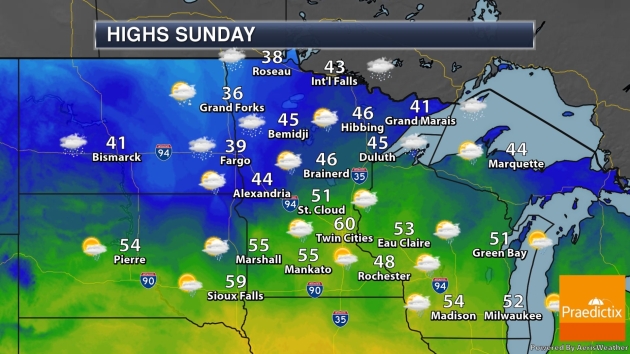 Mellow March. Yes, it’s still too early to take out the lawn furniture. But there’s now little doubt it my mind that ice is coming off Minnesota lakes 2-3 weeks earlier than last winter. My sense is an extra-long, extra-hot summer, but that’s more of a prayer than a prediction. Map sequence above: Praedictix and AerisWeather. 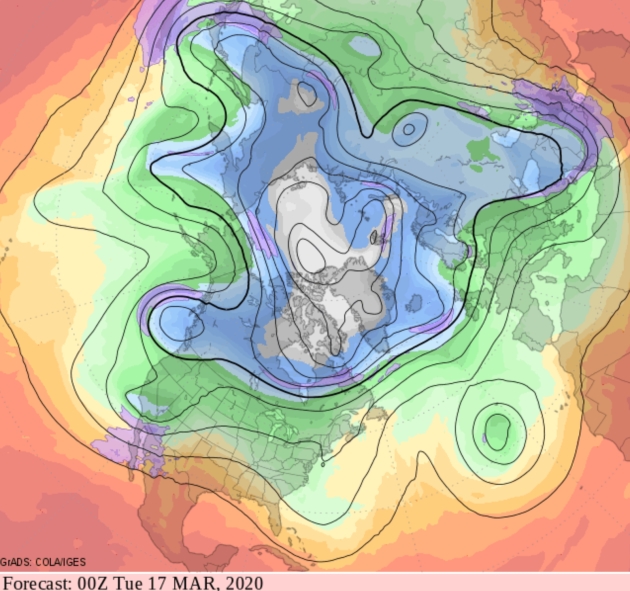 No Canadian Relapses in Sight. We’ll see more cold frontal passages (no kidding) but extended periods of polar air later this month? I don’t see it, at least not yet. It’s a mild, Pacific flow with the biggest storms tracking south of Minnesota into mid-month. 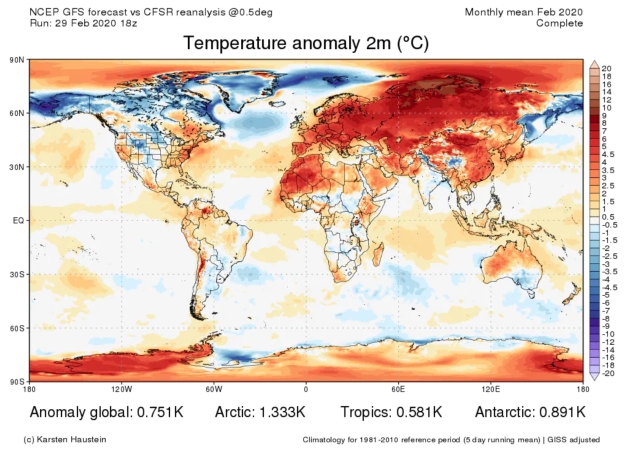 Moscow Crushes Record For Its Warmest Winter as Milestones Are Set Across Europe and North America. Capital Weather Gang puts the winter warmth into perspective: “The meteorological winter of 2019-2020 shattered temperature records in Russia and France, as well as other parts of Europe and the United States. In Moscow, this was the warmest winter in nearly 200 years of record-keeping, and the first winter there to have an average temperature at or above 32 degrees (0 Celsius). The average winter temperature during the months of December, January and February in Moscow was 32.3 degrees (0.2 Celsius), which is 11.3 degrees (6.3 Celsius) above the 1981-2010 average, and shatters the previous record held by the winter of 1960-61 by an astonishing 3.5 degrees (2.8 Celsius), according to Etienne Kapikian of Meteo France, along with the Russian TASS news agency. In Moscow, officials brought in artificial snow for New Year’s celebrations, as both December and January hit monthly temperature records as the city went through a rare snow drought...”

3″ snow on the ground at MSP International Airport Monday evening.

March 3, 1977: A snowstorm results in over 400 school closings in Minnesota and Wisconsin. 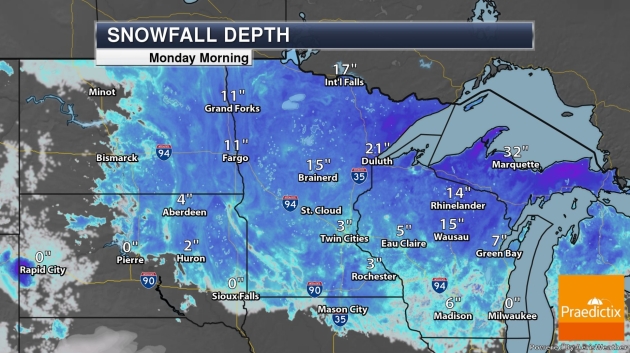 Climate Change is Threatening Winter Sports’ Very Existence. Here’s an excerpt from a story at CNN and Fox43.com: “...Years with below-average snowfall have a crushing impact on local economies. Bad winters can take more than $1 billion out of the US economy and affect more than 17,000 jobs, according to a 2018 study conducted by POW and REI. Since snowfall drives business in mountain towns, it’s no wonder that it’s often referred to as winter’s “white gold.” POW says that nearly 34 million Americans identify as an outdoor enthusiast. If you ski, snowboard, trail run, mountain climb or are a passionate outdoors person, you identify as an outdoor enthusiast…” 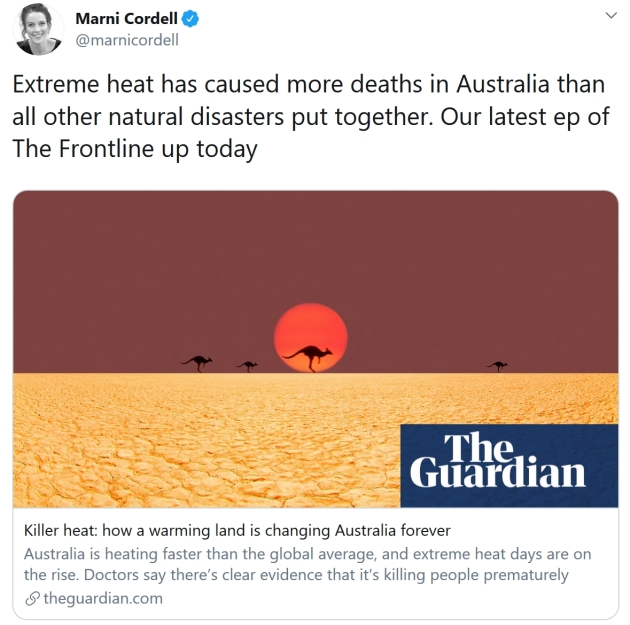 Climate Change: Australian Summers Now Twice as Long as Winters. BBC News has the story: “The Australia Institute found that summer across most of the country over the past 20 years was about a month longer than in the mid-20th century, while winters had become shorter. Between 2014 and 2018, summers were found to be about 50% longer. The findings followed Australia’s warmest and driest year on record. “Our findings are not a projection of what we may see in the future. Its happening right now,” the Australia Institute’s Richie Merzian said. The country experienced a devastating bushfire season, which killed 33 people and an estimated one billion native animals. While scientists said climate change was not the direct cause of the bushfires, they have long warned that a hotter, drier climate would contribute to Australia’s fires becoming more frequent and more intense…”