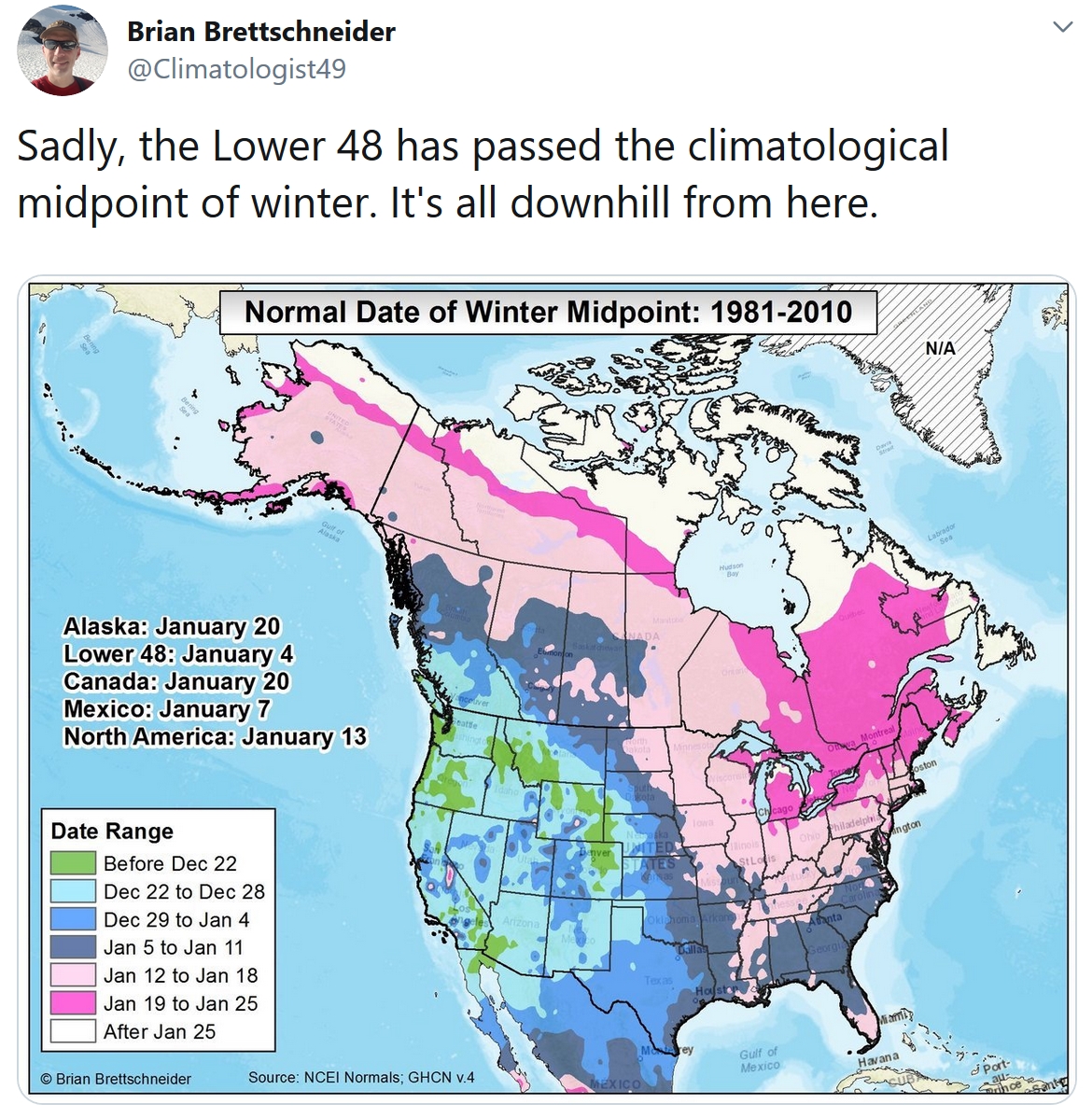 Sliding Into a Colder, Snowier Pattern

Congratulations. You are one of The Chosen Frozen. You laugh at wind chills that would cause the average American to shriek in horror.

We’ve gotten off easy in recent weeks. After a milder than average December, the first 12 days of January were nearly 7F warmer than average. Colder air is coming, setting the stage for a snowier pattern the next couple of weeks.

Snow tapers Saturday – Sunday should be a decent travel day. Single-digit highs on Monday give way to a slow warming trend next week.

Colder air is coming, but I don’t see any prolonged polar pain; nothing as nasty as the last couple of winters.

And consider this: across Minnesota January 12-18 is the midpoint of winter. In theory, average temperatures start to rise again by late January. In theory. On paper. 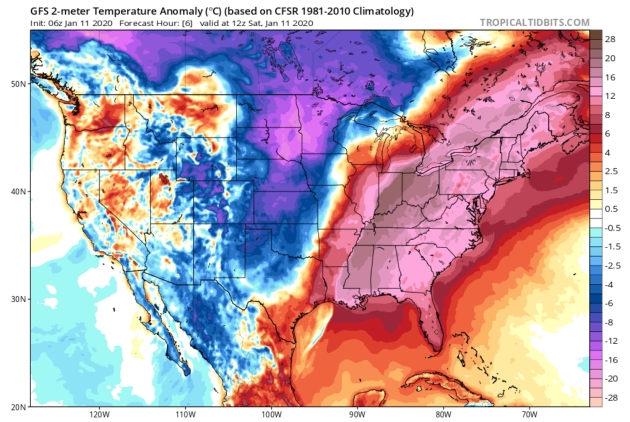 January Heat Wave? Temperatures 30-40F warmer than average? Impressive. Capital Weather Gang has details: “A winter heat wave made history over the weekend, setting dozens upon dozens of records in the eastern United States. As temperatures shot up more than 30 degrees above normal, January seemed to leap ahead to May. Boston, where highs are normally in the mid-30s at this time of year, soared to 74 degrees Sunday, joining several other cities in posting their warmest January day ever observed. The abnormally toasty conditions occurred as warm air surged out ahead of a deadly storm system responsible for severe weather in the South on Friday and Saturday. And it happened amid a weather pattern that has been more springlike than winterlike since late December. The magnitude of the warmth was yet another reminder of the influence of climate change, which is intensifying heat events and having a detectable influence on day-to-day weather, according to studies…”

Map credit: “An expansive area of well above normal temperatures stretched from the Gulf of Mexico to Canada as the weekend started.” (Tropical Tidbits)

7-10F Warmer Than Average January 1-11. Temperature anomalies were +10-13F for much of the Midwest and Ohio Valley. A nice long January Thaw, but it would be premature to write off winter just yet. 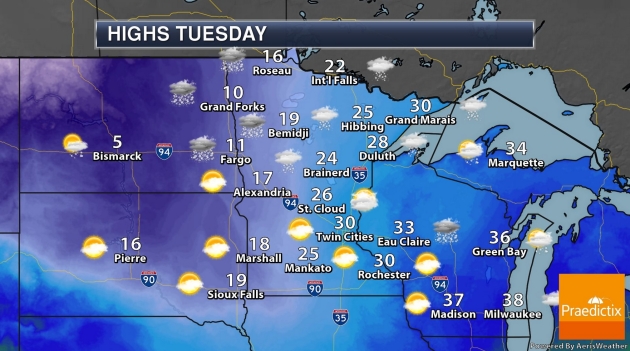 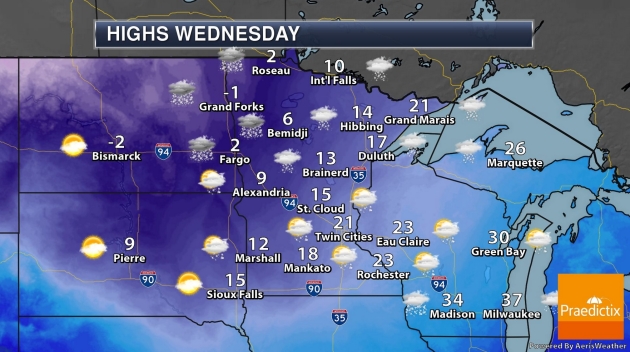 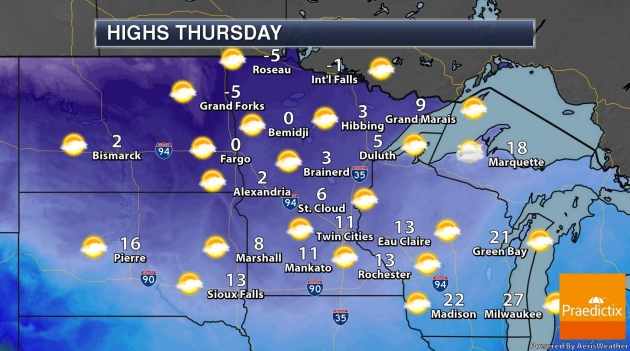 A Few Smacks of Numb. No blocking patterns in the next 2 weeks capable of prolonging subzero weather, according to NOAA’s GFS model. Not sure I want to be here on January 29. Graphic: WeatherBell. 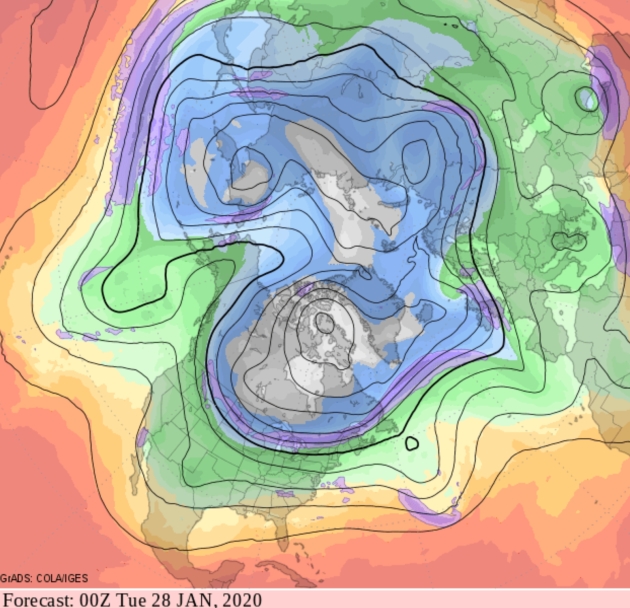 Coldest Shot To Date? If 500mb predicted winds from NOAA’s GFS verifies for late January, subzero air may brush the northern tier of the USA, with the coldest readings from Montana to Minnesota to Michigan. It’s too early to know whether the cold wave is transient/progressive, or whether a blocking pattern may prolong any polar pain.

Even by Minnesota Standards 2019 Was a Wild Weather Year. Last year was the wettest year on record for Minnesota. In case you missed a very good summary from Star Tribune; here’s the intro: “From January, which produced the coldest air mass in almost three decades, to mid-July, which gave us a flash heat wave, we saw an extraordinary 170 degree difference between the wind chill and the heat index in the Twin Cities. A barrage of winter and spring storms throughout Minnesota led to widespread river flooding and shattered the February snowfall record. Intense thunderstorms battered all corners of the state from mid-July through September, with straight-line winds, tornadoes, hail as large as grapefruits and localized flooding. Almost every month of the year saw above-average precipitation, leaving the Twin Cities and many other cities with record-breaking totals….”

2019: Wettest on Record From Dakotas to Michigan. In was the wettest on record (125 years of record-keeping), according to NOAA NCEI.

National Precipitation Trends Since 1895. It’s not a controversial statement to say that it’s getting wetter in the Lower 48 stats over time, according to NOAA data. 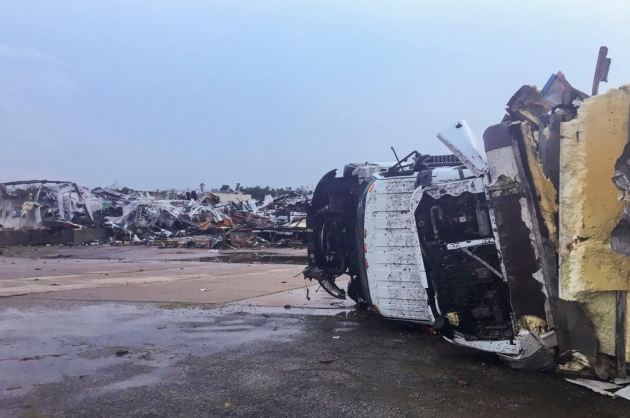 10 of the Most Memorable and Extraordinary Tornado Events of the 2010s. Matthew Cappucci has a good summary at Capital Weather Gang: “As we flip the calendar on the decade, many meteorological events will remain etched into our memory. But few tempests can rival the power, beauty and horror of a tornado. The 2010s featured their fair share of memorable tornadoes. 2011 included the most extreme tornado outbreak on record. Destructive tornadoes peppered population centers, altering lives forever. Others remained over open fields, as if posing for a camera. We look back — in no particular order — on 10 of the most memorable tornado events of the 2010s. The tornado and tornado events listed are not necessarily the most damaging and deadly in every case; some are included for their unique meteorological qualities and/or appearance…”

Body Temperatures are Dropping. Who knew? Popular Mechanics has a fascinating post; here’s the intro: “Interesting Engineering reports the average human body temperature has fallen gradually over time. Using hundreds of thousands of reported temperatures from the last 150 years, scientists made a linear plot that shows our temperature has dropped 1/20th of a degree Fahrenheit per decade. Why? Inflammation is evidence of the body’s immune response, and it’s caused by a variety of things…” 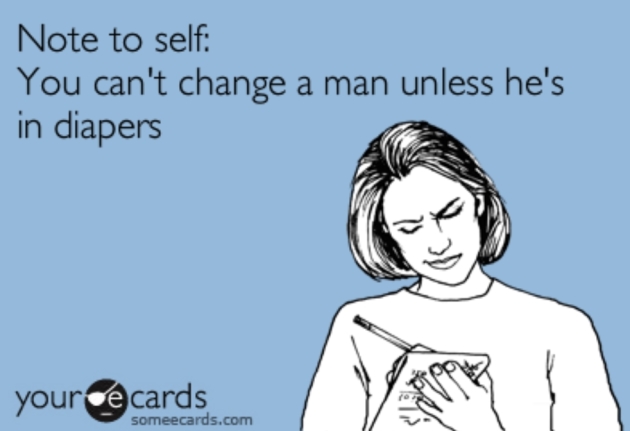 Dirty Diaper? There’s an App for That!  WDAF.com in Kansas City has the lovely details: “Lumi by Pampers is a smart sensor that attaches to your infant’s diaper and sends you a notification when they go to the bathroom. Pampers showed off the sensor, which also tracks sleep, at the Consumer Electronics Show (CES) in Las Vegas this week. Lumi by Pampers is described on the company’s website as “the world’s first all-in-one connected care system that helps parents track day-to-day developments, and monitor their baby, 24/7, so they can see emerging patterns and establish a suitable routine.” The Lumi system uses an HD night vision camera capable of monitoring temperature and humidity, the baby sensor and an app to compile the data for parents…”

4″ snow on the ground in the Twin Cities Monday morning.

January 14, 1952: A sleet and freezing rain storm develops across Minnesota from St Cloud south into Iowa. 1,100 Northwestern Bell telephone wires are knocked down. The Buffalo Ridge in the Pipestone area is the hardest hit with ¾ inches of solid ice on Northern State Power wires with icicles to 3 inches. Northwestern Bell reported ice up to 1 ½ inches on their wires in the same area. Thunder and a shower of ice pellets accompanied the storm in New Ulm and Mankato. Minneapolis General Hospital treated 81 people, victims of falls on icy streets. 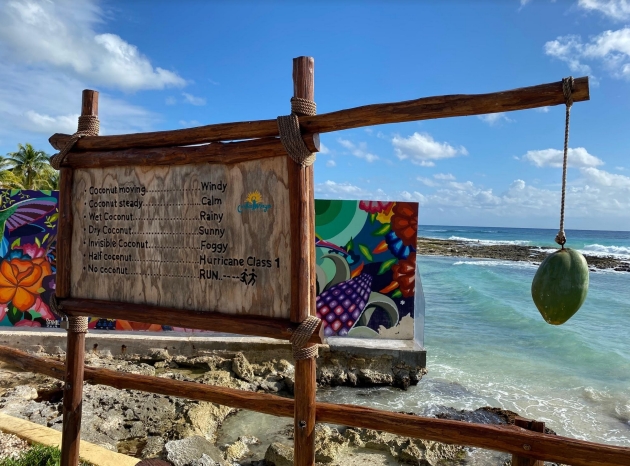 Ocean Temperatures Hit Record High as Rate of Heating Accelerates. The Guardian has details: “The heat in the world’s oceans reached a new record level in 2019, showing “irrefutable and accelerating” heating of the planet. The world’s oceans are the clearest measure of the climate emergency because they absorb more than 90% of the heat trapped by the greenhouse gases emitted by fossil fuel burning, forest destruction and other human activities. The new analysis shows the past five years are the top five warmest years recorded in the ocean and the past 10 years are also the top 10 years on record. The amount of heat being added to the oceans is equivalent to every person on the planet running 100 microwave ovens all day and all night…” 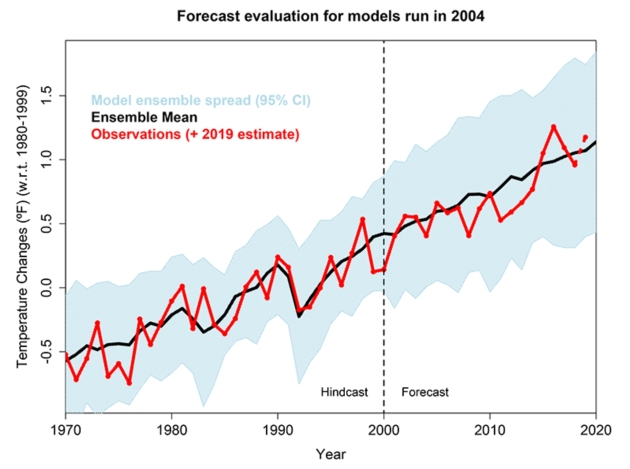 Study Confirms Climate Models Are Getting Future Warming Projection Right. So says NASA; here’s a clip: “…In a study accepted for publication in the journal Geophysical Research Letters, a research team led by Zeke Hausfather of the University of California, Berkeley, conducted a systematic evaluation of the performance of past climate models. The team compared 17 increasingly sophisticated model projections of global average temperature developed between 1970 and 2007, including some originally developed by NASA, with actual changes in global temperature observed through the end of 2017. The observational temperature data came from multiple sources, including NASA’s Goddard Institute for Space Studies Surface Temperature Analysis (GISTEMP) time series, an estimate of global surface temperature change. The results: 10 of the model projections closely matched observations. Moreover, after accounting for differences between modeled and actual changes in atmospheric carbon dioxide and other factors that drive climate, the number increased to 14…”

In Rural Colorado, the Kids of Coal Miners Learn to Install Solar Panels. Adapt or fade away. I was happy to see this post at Mother Jones: “…In Colorado’s North Fork Valley, solar energy—along with a strong organic farm economy and recreation dollars—is helping to fill the economic hole left by the dying coal industry, which sustained the area for more than 120 years. When the mines still ran, graduating seniors could step immediately into good-paying jobs. But in the past five years, two of Delta County’s three mines have closed. Approximately 900 local mining jobs have been lost in the past decade. Ethan Bates, for example, another senior in the solar energy training class, is the son of a mine foreman who lost his job when the Bowie Mine outside Paonia closed in 2016. Now, he’ll graduate as a certified solar panel installer…” 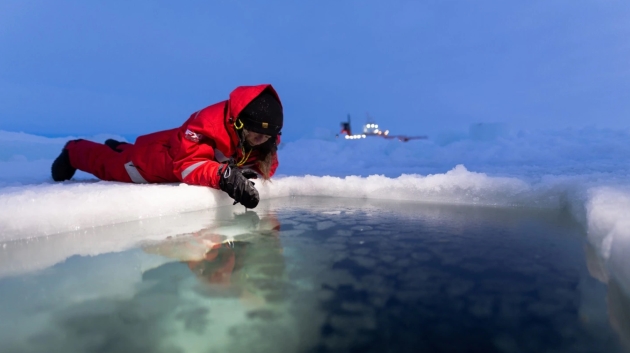 Voyagers to the “Epicenter of Global Warming” Struggle with Bears, Storms and Thin Ice. Here’s the intro to a post at The Washington Post (paywall): “Not long after the Arctic sun set for the final time last year, a ferocious storm descended on the isolated, icebound crew of the research vessel Polarstern. The polar night filled with the gunshot cracks of fracturing ice and the howls of 60 mph winds. The ship heaved, power cables snapped and a 100-foot meteorology tower toppled. A tremendous fissure opened in the floe to which the Polarstern was fixed, exposing the ocean waves. Researchers scrambled onto the ice to retrieve and restore their instruments. Hundreds of miles from the nearest source of help, the scientists were both unnerved and utterly exhilarated. This was exactly the sort of drama they were seeking when they set out to document climate change at the top of the world…”