A Hot, Thundery, July-Like Warm Front is On The Way 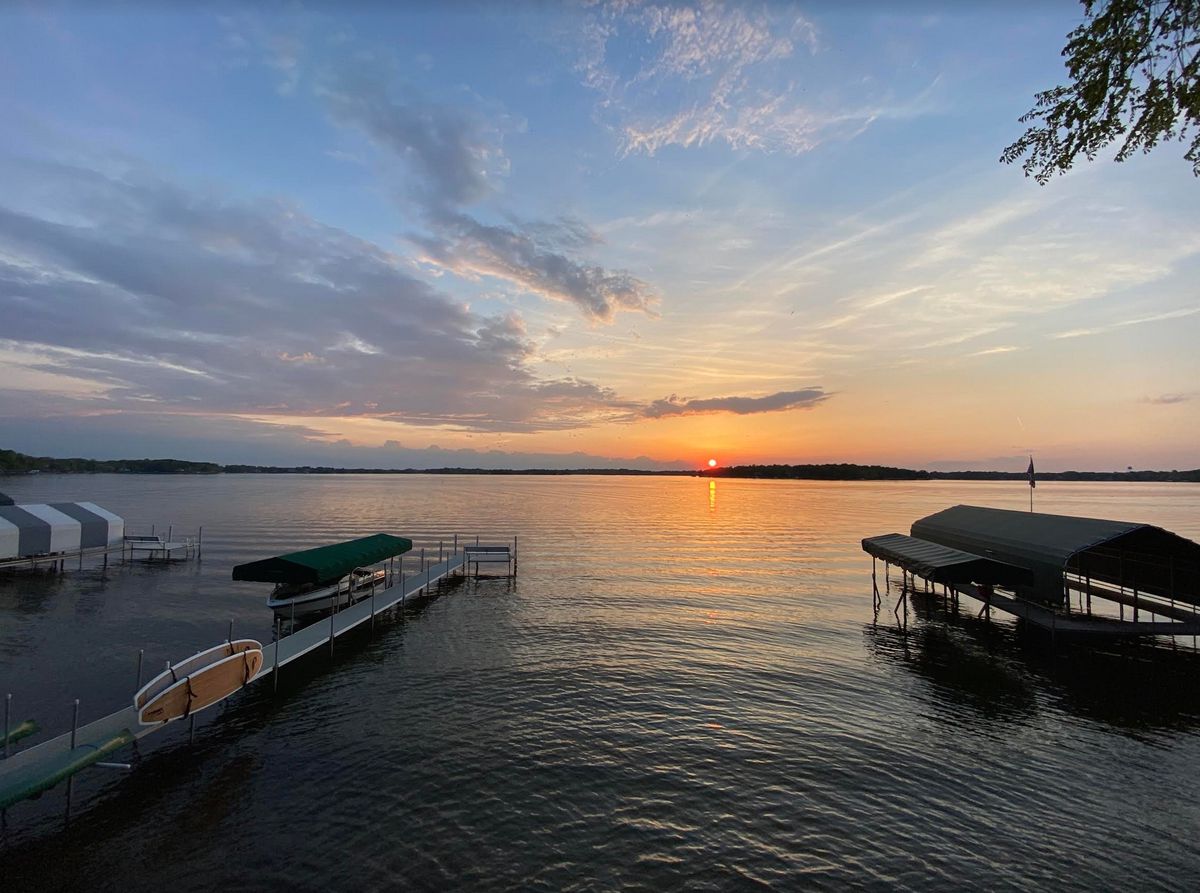 Welcome to Sunscreen Season in Minnesota

What do masks, seat belts, guard rails and sunscreen have in common? They all help to lower risk. Skin cancer is the most common cancer in the U.S. 1 in 5 Americans will develop skin cancer by the age of 70. Two people die of skin cancer in the U.S. every hour and having 5 or more sunburns doubles your risk of melanoma, which can prove fatal if not caught early.

Just a gentle reminder that for the next 4-5 months you can be sunburnt, even on a cool, cloudy day. Harmful UV rays from the sun can penetrate mid and high level clouds, and sunburn potential has nothing to do with temperature and everything to do with sun angle (ie. the date).

Sunshine fades today as a spurt of southern moisture pushes badly-needed showers in our direction. Expect numerous showers and T-storms Wednesday and Thursday, and then we dry out Friday and Saturday as temperatures soar into the 80s. Sunday may bring a few T-storms, but a very lake-worthy, July-like weekend seems to be shaping up.

Just remember a six-pack of sunscreen.

A Dry May, To Date. Through the first half of May rainfall amounts are running 1-2” less than normal across much of the Upper Midwest. Springs are trending wetter over time, but not this year, at least not yet.

Mellowing Mercury. By late week it will feel more like late June or early July with 80s and a dew point approaching 70F – very sticky air is on the way. Right now 80s seem likely from late this week into early next week, followed by a slight cool-down.

June 1: Sizzling South. GFS extended guidance out 2 weeks predicts a conga-line of cool fronts for northern tier states, while roughly the southern half of the USA enjoys sizzling heat.

A Home Able to Withstand a Category 5 Hurricane? A post at Capital Weather Gang caught my eye – here’s an excerpt: …“Obviously, the shape matters,” Linton said. “It’s a round home. It’s aerodynamic to the point you get about 30 percent less pressure that builds up against a Deltec home versus a conventional home.” In other words, the shape of the house helps deflect air flow around the structure rather than absorb that force, no matter which way the wind is coming from. “The second piece is the materials that go into the home,” Linton said. “We look at optimizing the materials … to all be about twice as strong as in a typical home. Every board is tested for strength. The plywood is twice as strong, and the metal connections we use are made in a completely different fashion…”

Why “Twister” is a Horror Movie For Me. Tornado PTSD is real. Adam Chitwood explains at Collider.com: “…I’ve lived through a couple of the deadliest tornado outbreaks in Oklahoma history, and while myself and my family were lucky enough not to be harmed, many have lost their lives to these weather events, and the economic impacts can be devastating. On May 3, 1999, dozens of tornadoes hit Oklahoma in a 21-hour period, killing 44, leveling homes and businesses, and completely destroying an entire outlet mall that left its town strapped for years to come. That storm spawned an F-5 tornado that was tracked for nearly 90 minutes, with winds gusting more than 300 mph and a diameter that was an entire mile wide at times. To this day, Oklahomans mark May 3rd as a day of remembrance. So yeah, watching Twister and seeing those familiar strange clouds, hearing those tornado sirens, or even just seeing a local weatherman who I grew up watching on the TV is a somewhat triggering experience...”

More Than 7,000 Schools Across the U.S. Are Solar Powered. PV Magazine has the post; here’s the intro: “Total installed solar capacity on U.S. schools has increased 139% since 2014, according to the 2020 Brighter Future report, released by Generation180, a non-profit that advocates for campuses to gain more access to solar power. While the capacity of solar installed at schools is up, so to is the total number of schools with solar installations, rising 81% since 2014. As of 2020, 7,332 schools nationwide have solar systems accounting for 1,337 MW of capacity. Solar schools now make up 5.5% of all public and private K-12 schools, almost doubling from 3% in 2014…”

Minnesotans For Clean Cars. Strangely enough, I am not threatened by this – giving consumers more choices seems like a very American idea to me. Here’s an excerpt from Minnesotans For Clean Cars: “…Car buyers in clean car states have a lot more clean car models to choose from – including crossovers and SUVs – and Minnesota should have all those options available here. A recent study found that 6 in every 10 prospective car buyers in Minnesota has interest in electric cars, trucks and SUVs. The survey also found that 66 percent of prospective Minnesota car buyers want automakers to provide more types of electric vehicles. Adopting the clean car program would help ensure Minnesotans can find these kinds of electric vehicles in the coming years. As a fuel source, electricity is less expensive, and the pricing is more stable than gasoline, and electric vehicles are also 3–4 times more efficient than internal combustion engine vehicles. Maintenance and repair costs can be 60% lower for electric vehicles due to simpler mechanics…”

In Defense of Snow Days. Remote learning only goes so far, argues a post at WIRED.com (paywall); here’s an excerpt: “…Technological solutionism, a term popularized by Evegeny Morozov’s 2013 book To Save Everything Click Here, broadly describes our culture’s increasing penchant for assuming that all problems can be solved by technology. Seen through this frame, it’s not surprising that the DOE views snow days not as a rare reprieve for students from the drudgery of school, but as an obstacle that can be easily overcome by plunking kids in front of screens at home. More importantly, this policy is merely an extension of the failed notion that remote learning would be a reasonable substitute for actual school over the past year in much of America...”

UFO’s Regularly Spotted and Tracked in Restricted U.S. Airspace. If you missed the 60 Minutes report Sunday evening it’s definitely worth 16 minutes of your time: “We have tackled many strange stories on 60 Minutes, but perhaps none like this. It’s the story of the U.S. government’s grudging acknowledgment of unidentified aerial phenomena— UAP—more commonly known as UFOs. After decades of public denial the Pentagon now admits there’s something out there, and the U.S. Senate wants to know what it is. The intelligence committee has ordered the director of national intelligence and the secretary of defense to deliver a report on the mysterious sightings by next month…”

May 18, 1980: Mt. St. Helens erupts. The smoke plume eventually rises to 80,000 feet, circling the earth in 19 days. Brilliant sunsets due to the smoke are seen over Minnesota for days afterward.

One Map Reveals a Warning for the Climate. CBS News explains: “…It’s clear from Hawkins’ map that the greatest warming on Earth is happening in the Arctic Circle area, where temperatures are rising at about 3 times the pace of the global average. Due to rapid warming, Arctic sea ice extent during its yearly minimum has been sliced in half. That floating sea ice does not contribute to sea level rise, but less ice means amplified warming — a warming feedback loop which quickens the pace of global warming. It’s this amplified warming of the Arctic that’s causing Greenland’s ice to melt 6 times faster than it did in the 1990s. This rapid ice melt from Greenland, scientists say, is what’s responsible for that big blue bullseye of regional cooling in Hawkins’ image. Here’s how it happens…”

Los Angeles Fire Season is Beginning Again. And It Will Never End. Fires are burning longer, larger and hotter and the extended outlook is troubling, reports New York Intelligencer: “…It is expected that by 2050, the area burned each year by forest fires across the western United States will at least double, and perhaps quadruple, what it is today as a result of warming. That is just three decades from now — the length of the mortgages that banks have extended to the homes on those fire-prone lands. After that, the picture becomes ­murkier — projections diverge, mid-­century, in part because different scientists take different approaches to estimating just what the fire environment will look like in a particular ecosystem once all its land has burned. In greater Los Angeles, that could happen as soon as 2050, when past experience, harrowing and biblical as it may seem, could cease to be any kind of guide for what’s ahead…”

Pathways and Pitfalls in Extreme Event Attribution. How much is “natural” vs. flavored by a warmer, wetter, more volatile climate system? SpringLink has the paper here: “…Nowadays, whenever an extreme weather or climate event occurs, the question inevitably arises whether it was caused by climate change or, more precisely, by the influence of human activities on climate. The interpretation of this question hinges on the meaning of the word ‘caused’: just as in the connection between smoking and lung cancer, the influence of anthropogenic climate change on extreme events is inherently probabilistic. Allen (2003) proposed that a related question could be answered: how has climate change affected the probability of this extreme event occurring? The process to answer these questions is referred to as ‘extreme event attribution’ and also includes attributing the change due to anthropogenic climate change in other characteristics, such as the intensity of the event. Since its initiation in 2015, the World Weather Attribution (WWA), an international collaboration of climate scientists, has sought to provide a rapid response to this question in a scientifically rigorous way for many extreme events with large impacts around the world...”

A Third of Global Food Production At Risk From Climate Crisis. The Guardian reports: “A third of global food production will be at risk by the end of the century if greenhouse gas emissions continue to rise at their current rate, new research suggests. Many of the world’s most important food-growing areas will see temperatures increase and rainfall patterns alter drastically if temperatures rise by about 3.7C, the forecast increase if emissions stay high. Researchers at Aalto University in Finland have calculated that about 95% of current crop production takes place in areas they define as “safe climatic space”, or conditions where temperature, rainfall and aridity fall within certain bounds...”

Crying About Hamburgers is Dead End on Climate Crisis, Republicans Warned. Here’s an excerpt of another post at The Guardian: “…Amid Biden’s attempts to cut planet-heating emissions, Republicans remain mired in the protection of fossil fuel interests, using aggressive, and sometimes invented, claims in the process. But the continued embrace of Trumpian rhetoric has concerned some younger Republican lawmakers aware of the increasingly dire warnings from climate scientists and growing voter alarm over global heating. “Plenty of members of the [Republican] conference are still in perpetual skeptic mode,” Peter Meijer, a 33-year-old Republican House representative, told the Guardian. “When you talk to younger conservatives, the issue of climate is No 1 or 2, but for older generations that’s not the case. It’s important for the future of our country and the party we stop viewing it as a partisan issue...”