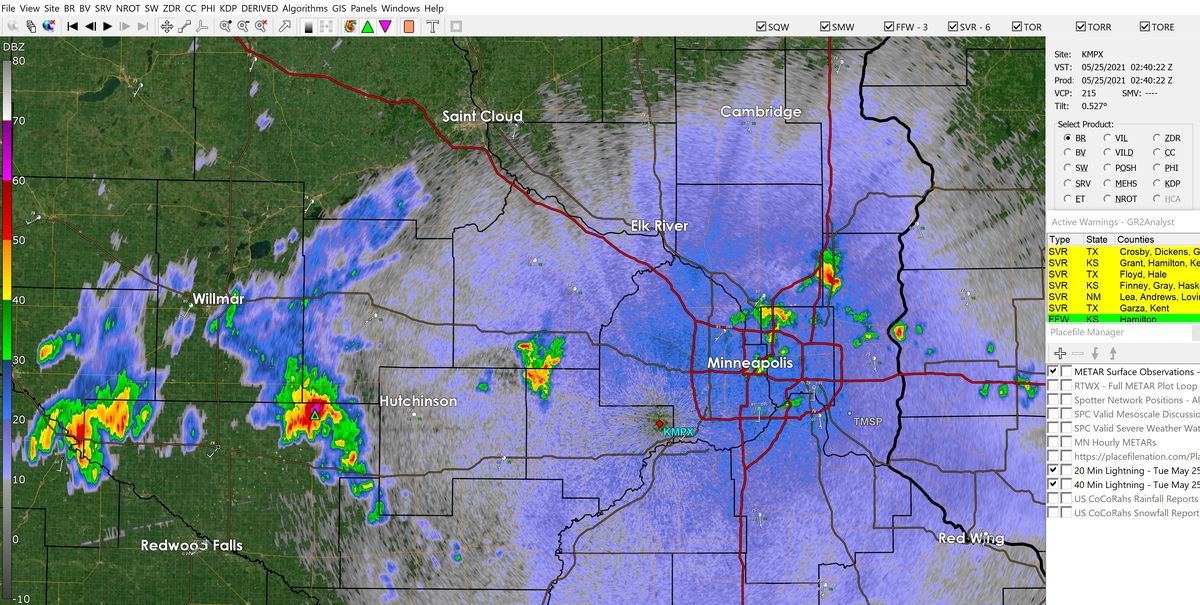 Note to Self: Rent the Tent

Do yourself a big favor and RENT THE TENT.

‘Tis the season for weddings and grad parties, coinciding with what is, on average, the wettest 5 weeks of the year.

Late May and June are volatile. Thunderstorms are frequent. Trying to time summer storms is an act of willful ignorance. If you don’t rent a tent please consider handing out life vests to your guests.

Warm sunshine today gives way to a chilled rain Thursday, but skies clear Friday – with respectable weather for the Memorial Day weekend. Right now Saturday looks dry, but thunderstorms may pop up Sunday and Sunday, especially south and west of the MSP metro. It’s early, but the farther north you go the sunnier and drier it should be next weekend. A little better than average for the first unofficial holiday of summer.

Nothing severe brewing, in sharp contrast to last Wednesday, when 7 tornadoes spun up between Owatonna and Lakeville. No injuries or major damage. A reminder that, in spite of amazing technology, Mother Nature can still surprise us.

Recap of Last Wednesday’s Freakish Tornado Outbreak Far South Metro. Here’s an update from the Twin Cities National Weather Service: “Several low-topped supercells developed along a warm front across Southern Minnesota Wednesday evening, May 19, 2021. Preliminary reports indicate these storms produced 7 short-lived tornadoes across southern Minnesota. Information on the tornadoes is being gathered, and EF-scale ratings and other statistics will be determined once the information is evaluated. This was a marginal CAPE, marginal wind shear environment with low cloud bases. A strengthening low-level jet led to an increase in low-level wind shear. This was able to produce a few low-topped supercells that were efficient tornado producers.”

NOAA Predicting Warmer Than Average June. At least for northern tier states and much of the western USA. Precipitation over the Upper Midwest is the flip of a coin, with a wet bias east and continued dry bias west of Minnesota.

Drying Out Today. The shower and thunder threat diminishes today as drier, westerly winds kick in – enough warm air mixing to the ground for low to mid 80s.

Wet, Chilly Thursday – Improving Over the Holiday Weekend. Temperatures may not get out of the 50s on Thursday with periods of rain, but skies slowly clear on Friday with 70s returning to much of Minnesota over the weekend. A nagging shower/thunder risk may linger for southern Minnesota part of Sunday and Memorial Day.

Cool Correction Latter Half of This Week. ECMWF and GFS both predict temperatures as much as 10-20F cooler than average by Thursday and Friday, followed by a mellowing trend as we push into June.

Summer Heat Expanding Slowly North. Heat arrives not all at once, but in waves, like breakers on the beach. As we sail into the second week of June much of America will be simmering in the 90s or hotter, with more seasonable (reasonable) temperatures over far northern tier states.

A Decade After Deadly Joplin Tornado, Warnings Haven’t Improved. Here’s How to Fix Them. Meteorologist Mike Smith reports for Capital Weather Gang: “Twenty-five years ago this month, the movie “Twister” proclaimed a critical goal for weather science: 15 minutes of lead time for tornado warnings. A decade later, that goal — thanks to the installation of a network of Doppler radars and other advancements — was essentially achieved: From 2005 to 2011, the average tornado-warning lead time was 13.3 minutes. The tornado warning system became one of the great scientific accomplishments of the 20th century. But since then, tornado-warning lead time has regressed, even with improved technology, suggesting that there is a need for an independent review of the National Weather Service’s tornado warning procedures and training...”

How Do Forecasters Make Hurricane Season Predictions? A post at EarthSky has good information about the factors that go into complex, (low-confidence) seasonal hurricane forecasts: “…The seeds of tropical storms are small and hardly menacing weather disturbances. You’ll find them scattered throughout the tropics on any given day. In the Atlantic, some start as clusters of thunderstorms over Africa, or as clouds near the Cape Verde Islands off Africa’s west coast. The vast majority of these seeds do not survive beyond a few days, but some are swept up by the easterly airflow to be planted over the tropical Atlantic Ocean between about 10 to 20 degrees north latitude. This is the field where growth is really fueled by the ocean. From there, developing tropical storms are carried westward and northward by the “steering currents” of the atmosphere – avoiding the equator where the crucial effect of Earth’s rotation is too small for them to develop further…”

Pope Francis to Get All-Electric “Popemobile” from EC Startup Fisker. NBC News has details: “Pope Francis, who has frequently spoken out on environmental issues, will trade in his popemobile for a new model running entirely on battery power. The pontiff met Thursday with Henrik Fisker and Geeta Gupta-Fisker, founders of the California-based electric car startup Fisker, who provided him with renderings of the vehicle they plan to deliver during the fourth quarter of next year. It will be based on the Fisker Ocean SUV the company plans to put in production in 2022. “I got inspired reading that Pope Francis is very considerate about the environment and the impact of climate change for future generations,” Henrik Fisker said in a statement…”

The Most Radical Thing About Ford’s F-150 Lightning? The Price. A post at WIRED.com (paywall) delves into pricing and tax credits: “The all-electric Ford F-150 Lightning, which the American carmaker rolled out Wednesday, boasts some impressive specs: 0 to 60 acceleration in 4.4 seconds; enough onboard power to keep a home running for three days; and a front trunk (the things you can fit in a vehicle when it doesn’t have an internal combustion engine). But the most remarkable thing about the Lightning pickup truck—apologies, the most shocking—is undoubtedly the price: $39,974 for the base model. That makes the electric F-150 cheaper than nearly all the electric competition. It’s on par with the Tesla Model 3 sedan, the most popular EV in America, and cheaper than the upcoming Cybertruck pickup by about $10,000...”

Can the News Be Fixed? The Atlantic (paywall) reports on efforts some broadcasters are making to increase viewership: “…Despite the fact that people generally trust local TV news, those Scripps surveyed also said the neighborhoods on the news did not resemble the places where they lived in real life. Again and again, people said they wanted something else. Their needs were not being met elsewhere, despite all of their digital options. “People were not feeling connected to each other or to their community,” says Sara Fahim, who led the home visits with colleagues from Seek, a market-research firm. People craved a deeper look, one that captured their community in full, not just in shards. They wanted longer stories with more context. They made fun of phony news anchors…”

How UFO Sightings Went from Joke to National Security Threat. The Washington Post (paywall) provides perspective on the U-turn among my public officials: “…That’s because official Washington is swirling with chatter — among top senators, Pentagon insiders, and even former CIA directors — about UFOs. What was once a ticket to the political loony bin has leaped off Hollywood screens and out of science-fiction novels and into the national conversation. There are even new government abbreviations. “This used to be a career-ending kind of thing,” said John Podesta, who generally kept his interest in UFOs to himself when he was President Bill Clinton’s chief of staff. “You didn’t want to get caught talking about it because you’d be accused of walking out of an ‘X-Files’ episode...”

Apple and the End of the Car as We Know It. Good luck predicting what (if anything) Apple will do, according to The Wall Street Journal (paywall): “…If there is any tech company on earth with the resources to go it alone, building a new auto maker from the ground up, it’s Apple. But there is no indication this is the company’s aim. If Tesla is the model here, it’s unclear why Apple’s executives would want to endure the tortuous process of building the manufacturing, testing and service capacities this path would require. If providing the brains for other auto makers’ vehicles is unlikely, and competing directly with Tesla and every other electric vehicle startup unsavory, that still leaves another option for Apple. As the automotive industry inches toward self-driving taxi services, Apple’s persistence in both acquiring and developing software and hardware for electric, autonomous vehicles could signal its long-term ambitions. Could an Apple mobility company, instead of an Apple car, make the most sense?…”

Climate Disasters Caused More Displacement Than War in 2020. The Guardian has details: “Intense storms and flooding triggered three times more displacements than violent conflicts did last year, as the number of people internally displaced worldwide hit the highest level on record. There were at least 55 million internally displaced people (IDPs) by the end of last year, according to figures published by the Norwegian Refugee Council’s Internal Displacement Monitoring Centre (IDMC). There were more than twice as many people displaced within their own country as forced out of their country as refugees, the IDMC said. The number is the highest on record, but in line with its steady rise over the past decade...”

Climate Change Creates Demand for Off-The-Grid Homes. CNBC.com explains: “…The growing effects of climate change are no longer seasonal. Increasingly extreme weather from climate change is now a year-round phenomenon. This has homebuilders reconsidering how they design and power new homes, and how to take them off the grid, so they can be more environmentally sustainable, as well as operational when disaster hits. It also has traditional homebuyers thinking more like survivalists. “More severe storms each year are going to further and further indicate the needs for resilient development,” said Ben Keys, associate professor of real estate at the University of Pennsylvania’s Wharton School…”

“War Footing” Needed to Correct Economist’s Climate Change Failings. Here’s a clip from a post at CNBC.com: “Economic forecasts predicting the potential impact of climate change have grossly underestimated the reality and delayed global recovery efforts by decades, according to a leading professor. Mainstream economists “deliberately and completely” ignored scientific data and instead “made up their own numbers” to suit their market models, Steve Keen, a fellow at University College London’s Institute for Strategy, Resilience and Security, told CNBC on Friday. Now, a “war-level footing” is required to have any hope of repairing the damage, he said…”

3M Study: 89% of People Agree That Climate Solutions Should Be Implemented Immediately. Here’s an excerpt from Environment + Energy Leader: “New research from 3M, “The State of Science Index,” exposes a growing concern and a sense of urgency surrounding the health of the planet. According to the survey, a significant majority (89%) of respondents agree that solutions to mitigate climate change need to happen immediately, and 89% confirm their belief that the world should follow science to help create a more sustainable future. Over the last year, climate change has become more of a concern for Gen Z adults (72%) vs. their older counterpart, baby boomers (68%). As a result of the pandemic, Gen Z has become more environmentally conscious (80%) compared to boomers (73%), the report shows...”