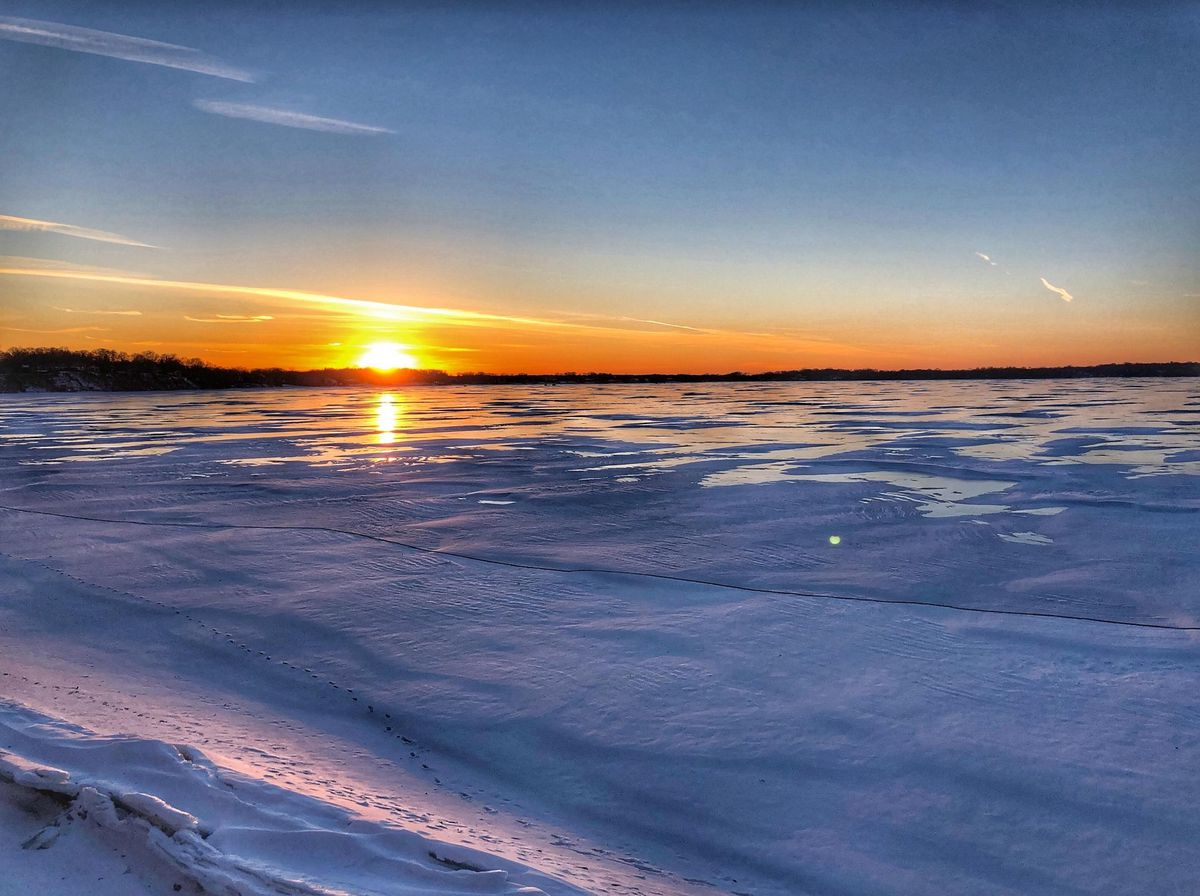 Snowbirds are missing all the fun! While cold weather refugees in Arizona and Florida pick sand out from between their toes, Minnesotans are playing in powder, enjoying 20s and 30s and light winds, with nary a storm in sight.

As a rule our coldest days tend to be sunny, and having blue sky overhead is a coping skill for many of us. Character-building attributes may be put to the test in 2 weeks, when the first blistering shot of arctic air reaches Minnesota. The last 7-10 days of January may be Nanook, with a streak of subzero nights, even a daytime highs below zero as well with dangerous wind chills. It’s too early for details but battery-draining air may envelope Minnesota and much of the USA by the last week of January.

Today’s short-term forecast challenge is clouds and fog. Unusually light winds (for January) favor ice fog every night. A weak sun may be unable to burn away clouds into the weekend.

Mild weather lingers into next week – then the bubble bursts, as we welcome a shot of polar air.

Forecast Wildcard: Fog. With winds about as light as I can recall in early January any fog and low stratus clouds that form overnight may be impossible to burn away later this week, keeping daytime temperatures cooler than they would be otherwise, with a strong inversion trapping chillier air near the ground. Even with the inversion I expect temperatures a few degrees above average.

Numbing End to January? Models (especially NOAA’s GFS guidance) are consistent in bringing much colder air into Minnesota and much of the eastern USA within 2 weeks or so. GFS may be overdoing the cold (high of -29F on January 22?) but the trends are undeniable; subzero weather is coming.

Cold Enough. Record-breaking cold? Too early to tell, but there’s now little doubt that we will be shivering through roughly the last 8-10 days of January. How long this cold phase hangs on into February is very much up in the air.

The Polar Vortex is Splitting in Two, Which May Lead to Weeks of Wild Winter Weather. Especially on the East Coast and New England, I might add. Capital Weather Gang has a good explainer: “A dramatic spike in temperatures is occurring at high altitudes above the North Pole, where the air is thin and typically frigid. Known as a sudden stratospheric warming event, experts say it’s likely to have potentially significant repercussions for winter weather across the Northern Hemisphere for weeks to possibly months. This unusually strong event may have profound influences on the weather in the United States and Europe, possibly increasing the potential for paralyzing snowstorms and punishing blasts of Arctic air, with the odds of the most severe cold outbreaks highest in Northern Europe...”

New in 2021: Atlantic Hurricane Outlook and Potential Impact. Military Times has a post with an interesting analysis: “…Klotzbach’s team will release a more detailed forecast in April that includes a projected number of storms, but their initial look says the Guard may stay busy in 2021. “One of the big reasons why we think the odds favor an above average season at this point is that we currently have a moderate La Niña event [in the eastern Pacific],” explained Klotzbach in a phone interview. La Niña means cooler Pacific water temperatures, which in turn reduces upper-level winds that “basically tear apart” Atlantic storms. But even if a season has more storms and stronger storms, he said, “We can’t say where the storms are going to go…it’s all about location, location, location…”

Amazing Earth: Satellite Images from 2020. NASA has a link to some pretty incredible imagery; here’s an excerpt of their post: “In the vastness of the universe, the life-bringing beauty of our home planet shines bright. During this tumultuous year, our satellites captured some pockets of peace, while documenting data and striking visuals of unprecedented natural disasters. As 2020 comes to a close, we’re diving into some of the devastation, wonders, and anomalies this year had to offer. NASA’s fleet of Earth-observing satellites and instruments on the International Space Station unravel the complexities of the blue marble from a cosmic vantage point. These robotic scientists orbit our globe constantly, monitoring and notating changes, providing crucial information to researchers here on the ground. Take a glance at 2020 through the lens of NASA satellites…”

Electric Cars Hit Record 54% of Sales in Norway as VW Overtakes Tesla. CNN.com has the story: “Battery electric vehicles accounted for more than half of all cars sold in Norway last year, putting the country way out in front in efforts to kill off the internal combustion engine. And Tesla (TSLA) lost its sales crown to the Volkswagen Group. Norway is using huge tax incentives to help ensure that every new passenger car and van sold in the country by the end of 2025 is a zero-emission vehicle. Record electric vehicle sales in 2020 means the country is now ahead of schedule, according to Oyvind Solberg Thorsen, CEO of the Norwegian Road Federation (OFV)…”

A Monster Wind Turbine is Upending an Industry. A renewable energy arms race? A story at The New York Times (paywall) caught my eye: “Twirling above a strip of land at the mouth of Rotterdam’s harbor is a wind turbine so large it is difficult to photograph. The turning diameter of its rotor is longer than two American football fields end to end. Later models will be taller than any building on the mainland of Western Europe. Packed with sensors gathering data on wind speeds, electricity output and stresses on its components, the giant whirling machine in the Netherlands is a test model for a new series of giant offshore wind turbines planned by General Electric. When assembled in arrays, the wind machines have the potential to power cities, supplanting the emissions-spewing coal- or natural gas-fired plants that form the backbones of many electric systems today...”

Japanese Researchers Hope to Launch Satellite Made of Wood. At first I thought this was an Onion headline, and then I realized that it’s real. Big Think explains the rationale: “NASA is currently tracking over 500,000 pieces of satellite debris circling the Earth. These bits of mostly aluminum junk whip around the planet as fast as 17,500 mph and constitute a floating minefield that active and manned space vehicles have to find their way through without being struck, or worse, punctured. And those are just the bits large enough to be tracked—those bigger than a marble. There are many more too small to keep an eye on. And the situation is getting worse, with projects such as SpaceX’s estimated 42,000 satellites or Amazon’s Kuiper project. The wood satellites being developed won’t do much to solve that problem. However, they will help out with another one: what happens to space debris when its orbit decays and it falls back to Earth? We’ve been lucky so far…”

20 Things That Went Strangely, Wonderfully Right in 2020. FORTUNE.com has an interesting list of things to be thankful for last year; here’s a clip: “…13. It happened: the octogenarian sex symbol. In the plague year, there seemed to be nothing that slowed Dr. Anthony Fauci down—not the pressure of being the public face in the war on COVID-19, not being caught in the political crossfire, and apparently not turning 80, which the good doctor did on Christmas Eve. A September poll by the Kaiser Family Foundation found that 68% of Americans have “a great deal” or “a fair amount” of faith in Dr. Fauci to provide reliable information about the coronavirus—making him a rare entity in the pandemic era: somebody trusted by the vast majority of the country. But it was “Saturday Night Live” that captured the fullness of Fauciphilia in its Dec. 12 “cold open...”

When You Live in Svalbard, Norway and Forget to Close the Window to the Home Office. Image courtesy of Wellthatsucks and Reddit. Wow.

Researchers Say Food Prices Don’t Reflect Environmental Costs. Big Think has the story; here’s an excerpt: “Using life-cycle assessment (LCA) tools, the researchers determined when emissions of carbon dioxide, nitrous oxide, and methane occurred in the food production process. The effects of land use, including deforestation, related to food production were also incorporated. The results were striking. Meat and dairy products are incredibly undervalued according to this measure. Pricing in the climate damage caused by their production would raise their prices by 146 percent and 91 percent, respectively. The prices of organic plant products would also rise, but by a mere 6 percent. Organic foods, in general, saw lower price increases than conventionally produced food products…”

Venus Was Once More Earth-like, but Climate Change Made it Uninhabitable. A post at astronomy.com explains: “Venus is a very strange place, totally uninhabitable, except perhaps in the clouds some 60 kilometres up where the recent discovery of phosphine may suggest floating microbial life. But the surface is totally inhospitable. However, Venus once likely had an Earth-like climate. According to recent climate modelling, for much of its history Venus had surface temperatures similar to present day Earth. It likely also had oceans, rain, perhaps snow, maybe continents and plate tectonics, and even more speculatively, perhaps even surface life. Less than one billion years ago, the climate dramatically changed due to a runaway greenhouse effect. It can be speculated that an intensive period of volcanism pumped enough carbon dioxide into the atmosphere to cause this great climate change event that evaporated the oceans and caused the end of the water cycle...”

2020 Was a Year of Climate Extremes. What Can We Expect in 2021? My (very strong) hunch is that 2020 will go down in the books as the warmest year on record, warmer than 2016. We shall see. Here’s an excerpt from TIME.com: “…A record-breaking Atlantic hurricane season landed a double blow of two hugely destructive storms in Central America. Long-running droughts have destroyed agricultural output and helped to push millions into hunger in Zimbabwe and Madagascar. A super-cyclone unleashed massive floods on India and Bangladesh. And overall, 2020 may end up the hottest year on record—despite a La Niña event, the ocean-atmospheric phenomenon which normally temporarily cools things down. Though it’s historically been difficult to say if single weather events were directly caused by climate change, scientists have proven that many of the events that took place in 2020 would have been far less likely, or even impossible, without changes to the climate that are being driven by the warming of the Earth…”

Study: Warming Already Baked-in Will Blow Past Climate Goals. Associated Press reports: “The amount of baked-in global warming, from carbon pollution already in the air, is enough to blow past international agreed upon goals to limit climate change, a new study finds. But it’s not game over because, while that amount of warming may be inevitable, it can be delayed for centuries if the world quickly stops emitting extra greenhouse gases from the burning of coal, oil and natural gas, the study’s authors say. For decades, scientists have talked about so-called “committed warming” or the increase in future temperature based on past carbon dioxide emissions that stay in the atmosphere for well over a century. It’s like the distance a speeding car travels after the brakes are applied…”

Biden Plan Looks for Buy-in From Farmers Who Are Often Skeptical About Global Warming. InsideClimate News has the post; here’s the intro: “When the incoming Biden administration released its policy roadmap in November, it was clear that tackling climate change would be a top priority and agriculture will be a key part of a broad, cross-agency effort. The U.S. Department of Agriculture, the administration said, “has not historically received the sustained political attention of other agencies that play a role in climate policy.” But it would become “a linchpin of the next Administration’s climate strategy.” The incoming administration’s clear focus on climate change was remarkable. That it would enlist the country’s farms and farmers—who are largely skeptical of climate change—in the battle was even more so...”