Don’t Give Up On That White Christmas Concept Yet 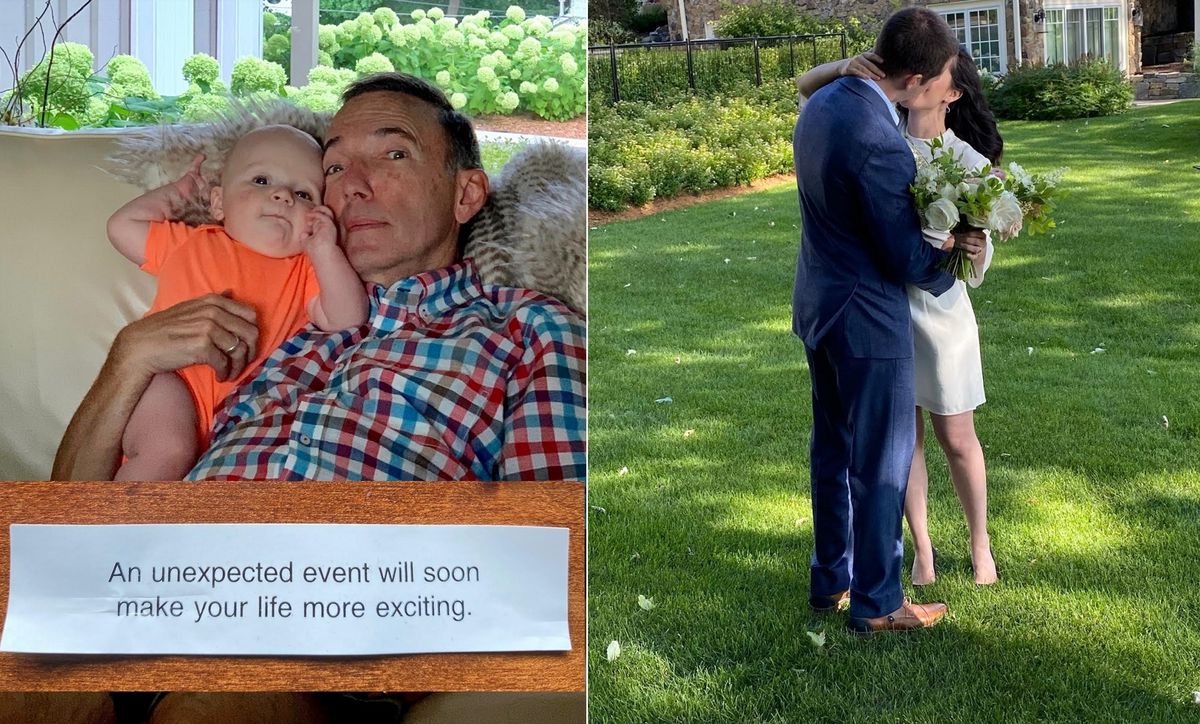 Don’t Give Up On That White Christmas

”Like planting daffodils during a Category 5 hurricane”. That’s how Minnesota epidemiologist Michael Osterholm described his life during a call last week. We’ve been living through a Category 5 viral hurricane for 11 months. We will all have stories to tell our grandkids.

I’ll choose Covid-amnesia, trying to hold onto unexpected bursts of joy amid a dark year. Like welcoming our kids and new grandson back from Seattle. And seeing our youngest son married in our backyard. The vows came with masks. Hopefully a white Christmas, too.

Latest models suggest a few inches of snow Wednesday PM hours, with much heavier amounts across Wisconsin. Confidence levels are low but I think we’ll see enough wind-whipped snow to qualify as a white Christmas.

MSP should hit 40F today, but temperatures tumble tomorrow as snow arrives. Winds gusting to 30 mph may lead to treacherous travel by Wednesday night. If you can sneak away first thing Wednesday you’ll thank yourself.

ECMWF Holding Firm With Accumulating Snow? Slam dunk? No, it never is. But the European model is still predicting potentially plowable snowfall amounts Wednesday into Wednesday night. Even if you cut the numbers in half it would still cover lawns and fields with a blanket of white in time for Christmas. We’ll see. But yeah, there’s still a chance.

The Nadir of Daylight. It’s all uphill from here in the daylight category; within 2 months nearly 2 additional hours of daylight. Yes please.

Will The Snow Drought Come To An End? After getting off to a promising start in October and November snowfall amounts have gone off a cliff in December. As temperatures finally cool it does looks as if we are (finally) heading into a snowier pattern.

Quick Concentrated Shot of Arctic Air. Most significant outbreaks of cold air are preceded by accumulating snow. Most, but not all. After a few inches of windblown snow on Wednesday Thursday and Friday will be vivid reminders that it is, in fact, still December.

Quick Hit, Then Back to Average. I still don’t see any prolonged outbreaks of arctic air, just a 2-day reminder it’s winter late this week, followed by a return of mostly-20s for daytime highs through the first few days of January, 2021.

Early January: Mild Signal Persists. January is, historically, the coldest month of the year, and we will see (bracing) cold frontal passages. But I continue to be impressed by the sheer persistence of the Pacific signal we’ve been witnessing since the latter half of November. Brief arctic slaps, sandwiched in-between (longer) spells of mild, Pacific-flavored weather regimes.

2020 Minnesota Climate Weather Review. Dr. Mark Seeley takes a look at the big picture in this week’s edition of Minnesota WeatherTalk: “…Even without the final statistics for December, we can say that in general it was a warmer and drier than normal year for Minnesota. December may end up among the 5 or 6 warmest in history and may be among the 10 driest in history on a statewide basis. The statewide average precipitation for this month so far is only 0.03 inches. From a temperature standpoint three months of 2020 were colder than normal, two months were very close to normal, and 7 months were warmer than normal. Overall, the year 2020 will probably rank among the 15 warmest years in state history (back to 1895). Extremes for the year were 102 degrees F at Granite Falls on June 7th and -40 degrees F at Cotton and Isabella on February 20th...”

20 Weather Occurrences That Could Have Only Happened in 2020. Weather.com breaks down some of the more memorable “weather events: “2020 will be remembered largely for a confluence of challenges unrelated to weather. The pandemic’s deadly toll, its economic impact, the scrambling of daily life, social unrest and a tumultuous election will probably remain top of mind when looking back at 2020. But weather certainly left its mark and, like 2020 itself, there were plenty of weather oddities. With that in mind, we ranked the 20 strangest things we saw in the year’s weather, mainly in the United States. We also have a sizable list of honorable mentions below our top 20 list, simply because we love weird weather…”

Wildfire Smoke is Loaded with Microbes. Is That Dangerous? WIRED.com takes a look: “…As wildfires become bigger and more intense thanks to climate change, researchers are finding a troubling rise in mycoses cases (meaning, any disease caused by a fungus) in the American West. Fungal spores “can act as an allergen and initiate asthma development in the atopic population and have been associated with decreased lung function, hospitalizations, and increased mortality,” says Mary Prunicki, director of air pollution and health research at Stanford University’s Sean N. Parker Center for Allergy Research, who wasn’t involved in this new paper. “Overall, many microbes are of concern for human health…”

Early Humans May Have Survived Harsh Winters by Hibernating. Sounds like a good idea to me. Wake me up in 2022, please. The Guardian reports: “…Evidence from bones found at one of the world’s most important fossil sites suggests that our hominid predecessors may have dealt with extreme cold hundreds of thousands of years ago by sleeping through the winter. The scientists argue that lesions and other signs of damage in fossilized bones of early humans are the same as those left in the bones of other animals that hibernate. These suggest that our predecessors coped with the ferocious winters at that time by slowing down their metabolisms and sleeping for months…”

The Star of Bethlehem: Can Science Explain What It Really Was? A post at Astronomy.com caught my eye: “On December 21, Jupiter and Saturn will come together in a “Great Conjunction” unlike any seen in nearly 800 years. The two planets will appear so close together in Earth’s night sky on winter solstice that they’ll almost look like a single object. That’s prompted some to dub the sight a “Christmas Star,” and others to wonder about a similar sounding celestial event that coincided with the biblical first Christmas: the Star of Bethlehem. But did such a cosmic sight ever really exist? And if so, what does astronomical science tell us about what could have caused it? Interestingly, there’s some evidence that a pair of planetary conjunctions — not unlike the coming Great Conjunction — happened around the historically accepted time frame for the birth of Christ. That could potentially explain the Star of Bethlehem…”

I’m Not THAT Hungry. Would you try this? I like Spam, but preferably with my scrambled eggs. AP reports: “McDonald’s is selling a sandwich made of Spam topped with crushed Oreo cookies Monday in China in an attention-grabbing move that has raised eyebrows… The sandwich is made of two slices of Spam, a product of Hormel Foods LLC, and Mondelez International’s Oreo cookies, topped with mayonnaise… McDonald’s Corp. said the sandwich was part of a series of “members only” promotions to be released on Mondays in China…”

39 F. high in the Twin Cities on Monday.

How Climate Change is Affecting Winter Storms. Not more storms, but the storms that do spin up (especially near the Atlantic Ocean) tend to be wetter, producing more snowfall. Here’s an excerpt from The New York Times (paywall): “…Although winters are becoming warmer and somewhat milder over all, extreme weather events have also been on the increase, and especially in the Northeastern United States, as Dr. Cohen pointed out in a recent paper in the journal Nature Climate Change. From the winter of 2008-9 until 2017-18, there were 27 major Northeast winter storms, three to four times the totals for each of the previous five decades. One of the factors potentially feeding storms is a warmer atmosphere, which can hold more water vapor; not only can that mean more precipitation, but when the vapor forms clouds, “it releases heat into the air, which provides fuel for storms,” said Jennifer Francis, a senior scientist at the Woodwell Climate Research Center…”

Earth Looked Like Hell From Space This Year. Check out the slideshow at Gizmodo: “On their own, each of the numerous weather calamities that befell the world in 2020 would be a crisis. But hurricane, floods, and wildfires intersected with the pandemic in ways that tested emergency response systems in ways they haven’t before. Piling the climate crisis on top of a public health crisis not only put evacuees in danger of contracting covid-19 while simultaneously losing everything they owned, it also strained disaster response resources and almost certainly contributed to ongoing disaster fatigue already plaguing first responders. This year will leave indelible scars on the landscape for years or even decades to come. The impacts will linger even longer in the atmosphere, where carbon dioxide released from fires will stay for a century or more...”

Biden Introduces Environment Team, Calls Climate Change “Existential Threat of our Time”. Fortune has more details: “President-elect Joe Biden introduced on Saturday key members of the team he is assembling to fulfill his pledge to combat climate change, calling them brilliant and qualified. Climate change is “the existential threat of our time,” Biden said, and the people he was nominating to lead the Environmental Protection Agency, the White House Council on Environmental Quality and the departments of Energy, and Interior will be “ready on day one.” “We need a unified national response to climate change. We need to meet the moment with the urgency it demands, as we would with any national emergency, ” Biden said at an event in Wilmington, Del…”

Shorting the Mortgage Market Because of Climate and Covid-19 Risks? A story at CNBC.com caught my eye; here’s an excerpt: “...Burt says that as the risks of floods, fires and wind increase, the cost of owning a home will go up — costs from higher insurance rates, higher taxes and uninsured losses. As the cost goes up, the value of the home goes down, and, consequently, the mortgage on the home is at higher risk of default. It is just like during the subprime storm, when borrowers who couldn’t really afford the homes they were buying were offered loans that were cheap up front but then quickly turned expensive. They then defaulted on those loans, and home values crashed, bringing the broader economy down with them. “This is going to be much more broadly impactful than just a mortgage story,” said Burt, who is using data from Boston-based risQ, a data analytics firm specializing in climate risk…”