Early Spring a Meteorological Omen of Hot Summer To Come? 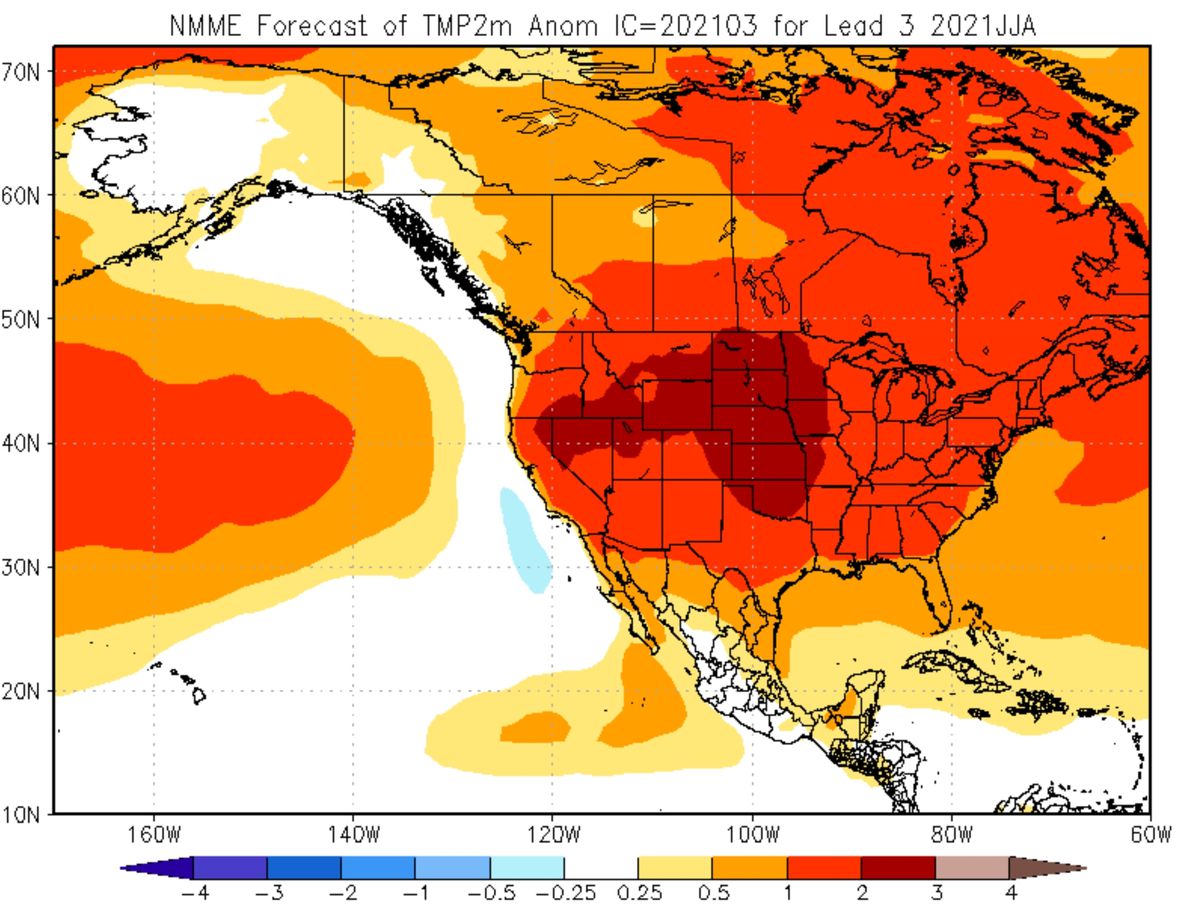 Early Spring An Omen Of a Hot Summer to Come?

Sometimes Mother Nature offers a preview of what may lie ahead, months down the road. March 29, 1986 saw a record 83F at MSP. The summer that followed was stifling for much of the southern United States. March 2012: another case of premature warmth, with flowers blooming in late March, followed by very hot and steamy Minnesota summer.

It’s true: Weather never repeats – but sometimes it rhymes. Ice is coming off Minnesota lakes 2-3 weeks earlier than usual. 73 degrees yesterday – 25 degrees warmer than normal for March 29. Wow. Lawns are already greening up. It looked more like late April out there.

Some of NOAA’s long range climate models are signaling a very hot summer. Low confidence on that prediction, but it’s an interesting data point.

Today brings an inevitable chilly correction, but temperatures will mellow again by late week, with 60s returning on Friday. Models suggest a good chance of 70s by Sunday and Monday as a real warm front approaches. Either way, a mild bias hang on into the first half of April.

But I’m leaving my snow tires on and driveway stakes in. Cheap insurance.

Where’s the Snow? Not much left after a very mild March across the state – still piles of snow over the Minnesota Arrowhead, but satellite imagery on Monday showed ice coming off Lake Mille Lacs and even many of the Brainerd Lakes.

March: Warmer and Wetter Than Average. After last week’s dousing rainfall totals for March are now over an inch above normal from Mankato and the Twin Cities on north to Duluth.

Chilly End to March – Balmy Start to April. We may actually go two days in a row with below-normal temperatures, statewide, before another thaw sets in by late week. NDFD numbers from NOAA (above) suggest weekend highs may be close to 70F from the Twin Cities on south and west.

A Serious Roller Coaster. GFS is more aggressive with weekend warming; I’m leaning toward the slightly more conservative ECMWF guidance, which shows 70s holding off until Sunday and Monday. Spurts of warmth followed by cool corrections, but still a mild bias, overall, into mid-April.

More Mid-May Than Mid-April. I’m struck by the lack of cold air predicted across most of Canada and the U.S. two weeks out. With the exception of the Pacific Northwest and New England most of the nation will be considerably milder than average, if this GFS solution verifies.

Experts Recommend Moving Away from Term “Tornado Alley”. It’s a pretty big alley, come to think of it. Here’s an excerpt from an informative post at Capital Weather Gang: “…The real area at risk for tornadoes stretches from northern and Central Texas to the Dakotas and all the way eastward to the Midwest and Appalachians; it most certainly includes the Deep South, Mississippi Valley and Tennessee Valley, as well as Florida. The case could even be made to lump tornado-prone parts of the Mid-Atlantic in there. “I think there are several reasons to move away” from the term, wrote P. Grady Dixon, a professor of atmospheric sciences at Fort Hays State University in Kansas, in an email. “But ultimately, I think the most important thing is to continue raising awareness.” Might we rename this much larger area “tornado country?…”

A Look at the Biggest and Deadliest Tornadoes: EF5s. A story at baynews9.com has interesting perspective on the most destructive tornadoes: “...There are also other oddities on the map. For example, Florida has never had a EF5/F5 tornado. The furthest west an F5 tornado was documented was in the Texas Panhandle in Lubbock, Texas, in 1970. The furthest east F5 tornado was in Niles, Ohio in 1985. The southernmost was the monster and slow-moving Jarrell, Texas tornado in May 1997. The northernmost was in Fargo, ND in 1957. Other oddities include two cities that were struck twice: Waco, Texas and Moore, Oklahoma. Waco, TX had F5 tornadoes in 1953 (killing 144) and in May 1973 (on the ground only 100 yards and causing no injuries or fatalities). Moore, Oklahoma (a suburb of Oklahoma City) has also been hit twice and both twisters were devastating. Moore was hit in May 1999 (36 killed) and again in May 2013 (24 killed)...”

Here’s How Biden’s Infrastructure Package Will Likely Tackle Climate Change. CNBC.com has an analysis: “President Joe Biden this week is set to unveil details of a major infrastructure package that’s expected to include record spending on mitigating climate change and accelerating a nationwide transition to clean energy. The president is expected to introduce up to $3 trillion in spending on efforts to boost the economy, including rebuilding aging infrastructure like highways, bridges and rail lines, and investing in technologies to reduce planet-warming greenhouse gas emissions.

Some of the policies on the table include:

Why Hurricanes and Typhoons Will Become More Dangerous. Dr. Marshall Shepherd has analysis of recent research at Forbes.com: “…A new review study just published in the journal ScienceBrief Review analyzed over 90 peer-reviewed articles to see if there was a consistent signal of human activities affecting typhoons, hurricanes, and other tropical cyclones. As a reminder, these are studies that have been vetted, reviewed, and critiqued by experts. They are not opinions in social media, blogs, or editorials. The researchers were made up of a team of scientists from Princeton University, University of East Anglia, and the National Oceanic and Atmospheric Administration (NOAA). According to a press release from the University of East Anglia, “studies showed growing evidence that climate change is probably fueling more powerful hurricanes and typhoons, a trend that is expected to continue as global temperatures rise…”

Why the Climate Crisis Will Intensify the Border Crisis. Axios explains how the two are intertwined: “…People make the difficult decision to leave their homes for many reasons, including conflict and crime, political persecution, and the simple desire for a better life. But a factor now — and even more so in the future — is the push of extreme weather and climate change, which will disproportionately affect the people living in the poorer, hot countries that are already a major source of migrants to the U.S. That means the U.S., as well as the rich nations of Europe and even countries like India, will likely face a permanent and likely growing flow of climate migrants that they and the international refugee system more broadly are ill-equipped to handle...”

Is Hail America’s Most Underrated Climate Risk? The data on hail in a warming climate is still largely inconclusive, but some insurance companies aren’t waiting for more data, according to a post at The Atlantic: “…This runaway hail risk is discombobulating the insurance market: In 2018, the insurance giant Zurich North America announced that it would no longer insure hundreds of Midwestern car dealerships because of “catastrophic” hail damage. Second, I’m intrigued by who the study’s authors are. Kubicek and his colleagues have scientific credentials, but they’re not academics. They work at an insurance start-up called Understory, which protects car dealerships against hailstorms. Kubicek is, in fact, Understory’s chief executive. Insurance is where the economy of spreadsheets and Zoom invites meets the economy of flesh and steel and falling chunks of ice…”

Earth’s New Gilded Era. Income inequality? A sharp divide between the haves and have-nots includes an ability to deal with the implications of a rapidly-changing climate. The Atlantic (paywall) has the post: “…Scientists and people with good sense around the world recognize the manifold perils of a climate crisis: an onslaught of tropical systems in the Atlantic Ocean, the relentless burn of wildfires in California and Oregon, the hundred-year floods that now encroach annually. Less appreciated, perhaps, are the direct effects of that increasing warmth on human bodies and communities. Heat is already often deadly, and even below fatal thresholds it is a grinding attrition that saps personal and economic vitality a little more each day. In the coming century, when wealth inequality will likely increase and the spaces where humans can live comfortably will shrink, the heat gap between rich and poor might be the world’s most daunting challenge…”

White House Sends Invites For April Climate Summit: Climate Nexus has headlines and links: “President Biden on Friday invited heads of state from 40 countries to his administration’s April 22-23 virtual Climate Leaders Summit. The invite list includes every member of the G20 and smaller nations the White House said are “demonstrating strong climate leadership” or are facing particularly devastating impacts of climate change. The virtual summit will coincide with the administration’s announcement of a new, stronger emissions target as part of the Paris Agreement, and the administration hopes to use the summit to build momentum for COP26, scheduled to be held in Glasgow, Scotland in November.” (AP, New York Times $, Reuters, AFP, Politico Pro $, CNBC, Bloomberg $, The Hill, The Guardian)

Is Big Oil (Really) In Favor of a Carbon Tax? Cautious skepticism is called for, according to a post at Axios: “…For all the fanfare around API’s move, it’s not like they’re endorsing the Green New Deal. A tax on carbon is perhaps one of the most basic climate policies out there—and it’s most definitely not part of any “radical left” agenda. It has the endorsement of oil companies and even some major nonprofits, which are part of the bipartisan Climate Leadership Council. And now, the oil industry’s lobbying wing is into it. Yet it’s almost certainly DOA with Republicans legislators, and that’s largely because API has spent the previous decade-plus railing against any type of policy that puts a price on carbon...”