Hot Enough? It Will Be Soon – Near Record Heat This Weekend 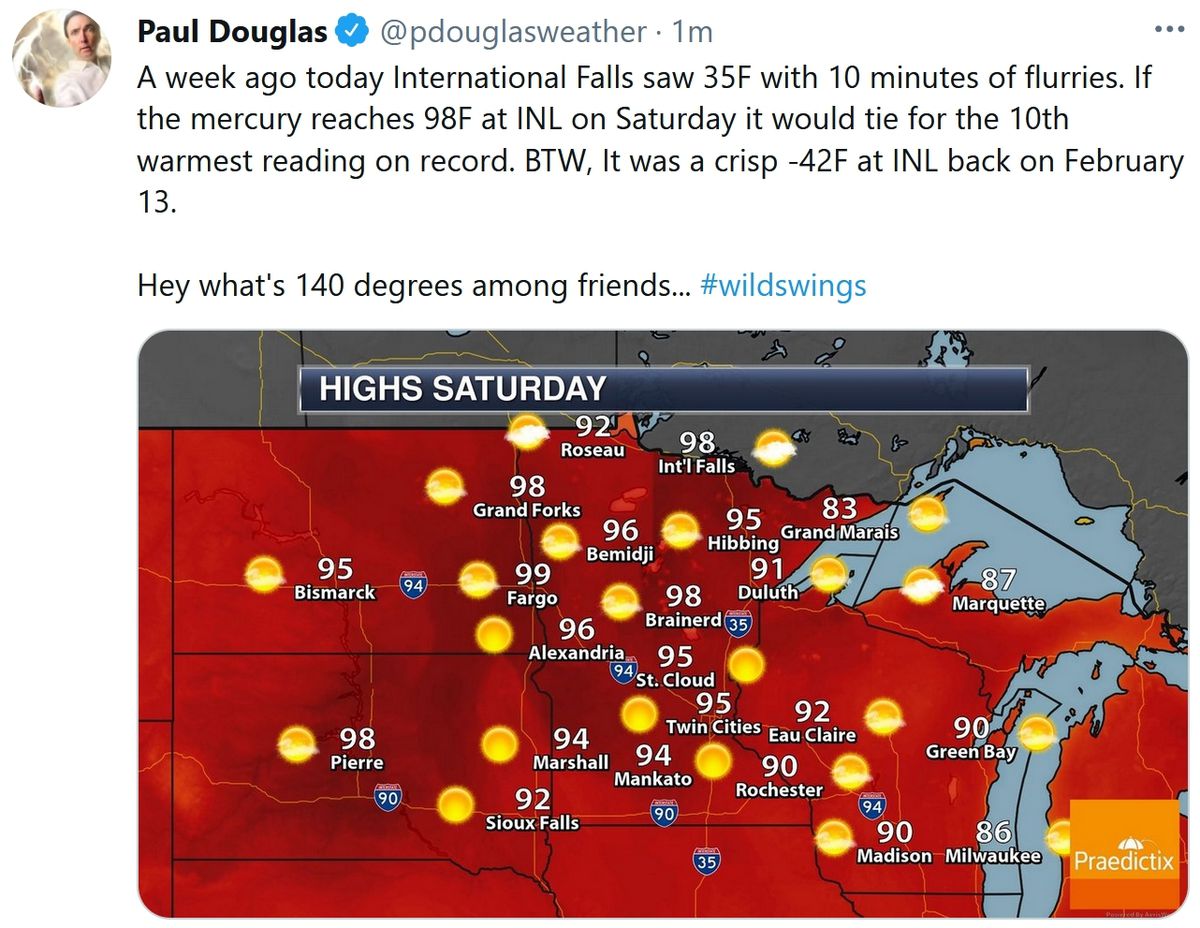 ”It’s not the heat, it’s the humility.” Close enough for a meteorologist. On Twitter Thomas Braun reminded me that we are the Florida of Canada. Good point. I’ve often wondered if Canadians complain about “hot, American air” this time of year?

A notable heat spike is on the way. Friday and Saturday look like the hottest days in sight. Mid 90s will be commonplace; record territory for many cities across the Upper Midwest.

International Falls saw 35F and flurries last Wednesday. On Saturday the daytime high at INL is forecast to be a blazing 98F. Amazing.

I do not see much relief next week as a ridge of high pressure, a super-heated bubble of blazingly-hot air, remains stuck over the Rockies and Plains. Airmass thundershowers will mushroom to life, providing temporary cooling, but we should be close to 90F most of next week as well.

NOAA’s climate models have been predicting a hotter, drier summer for most of the USA for months now. Healthy skepticism is quickly giving way to the realization that they’re probably right!

Record Territory. Predicted highs are on the left, records on the right. Much of Minnesota will be close to record heat values by Friday and Saturday.

Seriously Hot. Mid-90s look increasingly likely, especially Friday and Saturday, across much of Minnesota. Showers and T-storms become more numerous next week, but dry, sun-fried weather is the rule into much of Monday.

Hot Enough For Me. Yes. Canada’s GEM model is still the hottest of the bunch, but ECMWF and GFS are coming around to mid-90s by Saturday, probably the hottest day. ECMWF suggests highs near 90F through most of next week.

Simmering June Heat. If GFS verifies (place your bets) most of the U.S. will be baking by mid-month, an extended heat event from California and Oregon to the East Coast. All signs point toward a hotter (drier) summer season for most of the nation.

2021 Atlantic Hurricane Season. Dr. Ryan Maue has thoughts in a post at Substack Weather and Climate: “…Over the past 50-years, the Atlantic basin has transitioned from an inactive-era to an active-era exactly in 1995. Indeed, the mean ACE between the two periods has doubled from 68 to 135. There are various theories for the change in Atlantic hurricane activity including the Atlantic Multidecadal Oscillation (AMO) and the reduction of aerosols against the backdrop of anthropogenic global warming. When will the AMO cycle soon shift back to a colder-state with inactive hurricane activity? I’d lean toward 2030…”

Amazon to Help During Hurricane Season With Quick Delivery of Disaster Relief Supplies. Well, Amazon does have the logistics and shipping challenges figured out. Your move FEMA. CNN.com has details: “The 2021 Atlantic hurricane season officially begins today, and it is forecast to be yet another busy one. With an active season in mind, Amazon and the Red Cross are hoping a brand new disaster relief hub and partnership will allow for a faster response to locations hit by hurricanes and other natural disasters. “Our disaster relief and response team is partnering with global humanitarian relief organizations to leverage Amazon’s scale to help improve response time to large-scale natural disasters around the world,” Alicia Boler Davis, vice president of Global Customer Fulfillment at Amazon, said in a news release to CNN…”

Derecho Season Is About to Begin. Capital Weather Gang puts these vast, sprawling and fickle wind storms into perspective: “…In some parts of the country, derechos occur on average more than once per year. In fact, parts of the Midwest and Heartland area are as prone to damaging derechos as Florida is to hurricanes. And with derechos, the footprint of hurricane-force winds can often be more geographically extensive than with a hurricane itself.Derechos feed on warm, humid air. They start as ordinary thunderstorms but tap into jet stream energy, quickly expanding and swelling into a lengthy band of storms resembling an archer’s bow. The storms take the shape of a backward-C, the middle of the line propelled outward by strong winds descending behind them. Winds often gust upward of 80 mph. According to the American Meteorological Society, derechos produce a swath of winds at least 60 miles wide and more than 400 miles long…”

10 Tips for Kids Interested in Weather. Yeah, the calculus nearly killed me. Dr. Marshall Shepherd has good advice in a post at Forbes; here’s an excerpt: “…I cannot tell you how many times a student walks into my office wanting to major in atmospheric sciences or meteorology because they are fascinated by storm chasing, hurricanes, or cloud formations. However, the conversation often takes a sharp turn when I lay out all of the required courses in calculus, differential equations, physics, thermodynamics, atmospheric physics, dynamics, statistics, and other subjects. Head this off by doing your absolute best in math and sciences classes now. I also challenge educators to make science and math fun and not just chalkboards and equations…”

Why Electric Cars Will Take Over Sooner Than You Think. Wishful thinking or technological inevitability? People change habits when they can get more performance for less cost. History suggests we are very (very) close to that inflection point. Here’s an excerpt from BBC News: “…We’re on the verge of a tipping point, says Ramez Naam, the co-chair for energy and environment at the Singularity University in California. He believes as soon as electric vehicles become cost-competitive with fossil fuel vehicles, the game will be up. That’s certainly what Tesla’s self-styled techno-king, Elon Musk, believes. Last month he was telling investors that the Model 3 has become the best-selling premium sedan in the world, and predicting that the newer, cheaper Model Y would become the best-selling car of any kind. “We’ve seen a real shift in customer perception of electric vehicles, and our demand is the best we’ve ever seen,” Mr Musk told the meeting. There is work to be done before electric vehicles drive their petrol and diesel rivals off the road. Most importantly, everyone needs to be able charge their cars easily and cheaply whether or not they have a driveway at their home…”

June 3, 1955: Seven people are killed on Lake Traverse when their boat is overturned by strong winds from a thunderstorm.

Summer Temperature Trends. Since 1970 slight cooling has been observed over the Dakotas during the summer season, while most of the USA has warmed up significantly, especially nighttime temperatures. Here’s a good overview from Climate Central: “A Climate Central analysis evaluated 51 years of summer temperature data in 246 U.S. locations. Results show an overall warming trend for the summer season, with:

Summer Nights Warming Faster. Data crunched by Climate Central shows a 4.3F rise in nighttime temperatures since 1970. More moisture in the atmosphere (higher dew point temperatures) prevents temperatures from falling as much as they would in a drier atmosphere. Humidity levels are trending upward during summer months, more 70-degree dew point days, and nights are consistently warmer and more uncomfortable.

Biden Suspends ANWR Leases: Climate Nexus has headlines and links: “The Biden administration suspended oil drilling leases in ANWR. The formal order from DOI Secretary Deb Haaland, if unsurprising, starts what will likely be a lengthy process to undo one of the Trump administration’s biggest (anti-)environmental actions. The sale of ANWR leases, described as “absolutely bonkers” by climate advocates at the time it was announced last year, culminated in a hurried and ultimately underwhelming lease sale just days before Trump left office. Those existing ANWR leases could be canceled if the administration determines they were granted illegally by the Trump administration; the Biden administration has defended the legal process by which the Trump administration issues leases elsewhere. Last month, the notoriously pro-oil IEA said all new exploration for oil and gas must end immediately if the world is to limit global warming and avoid the worst and most destructive impacts of climate change.” (Washington Post $, New York Times $, Axios, AP, Alaska Public Media, Anchorage Daily News, BBC, Reuters, NPR, Rolling Stone, UPI, Wall Street Journal $, Al Jazeera, The Verge, NBC, Politico, CNN)

With Trump Gone, Old Fault Lines in the Climate Movement Reopen, Complicating Biden’s Path Forward. Inside Climate News has the inside story; here’s the intro: “As President Joe Biden works to enact his plan for cutting greenhouse gases, a long dormant rift among climate action activists is surfacing. On one side are those who believe that renewable energy—especially solar, wind, and hydroelectricity—will be sufficient to fuel the economy and get the world to zero emissions. On the other side are those who, like the Biden administration, think fossil fuels are likely to have a role in the nation’s energy future, making it important to invest in technology to capture carbon emissions. This dispute was largely buried in recent years, as progressives and moderates bonded together to oppose President Donald Trump’s wholesale unraveling of environmental protections. But now it threatens to complicate the already difficult job that Biden faces in getting his $2 trillion American Jobs Plan through Congress…”

Climate Change and Hurricanes. June 1 is the traditional start of the hurricane season, and although consistently warmer ocean water may not spawn more hurricanes, the storms that do develop have a better chance of rapid intensification. Here is an excerpt of a good overview of climate impacts from Climate Central:

Hurricanes Are Becoming More Dangerous. Here’s Why. An earlier CNN.com post describing how a warmer, wetter climate is spiking (some) hurricanes is timely; here’s an excerpt: “…If humans continue to emit heat-trapping gases into the atmosphere, scientists expect that sea levels will climb even higher, putting major cities at an even greater risk. Sea levels are now likely to rise more than 3 feet by 2100, according to the findings of a landmark report published last year by the UN’s Intergovernmental Panel on Climate Change. Generally speaking, a rise in sea levels of 2 to 3 feet would mean that a Category 1 hurricane could be capable of inflicting the kind of storm surge damage we would expect today from a Category 2 storm. In the Southeastern US alone, the annual cost of storm surge damage is projected to grow to $56 billion by 2050, according to the US government’s 2018 National Climate Assessment. And that’s even if global emissions of heat-trapping gases are moderately curbed in the next two decades…”

Three Exxon Refineries Top the List of U.S. Polluters. Details via Reuters: “Exxon Mobil’s U.S. oil refineries pump out far more lung-damaging soot than similarly-sized facilities operated by rivals, according to regulatory documents and a Reuters analysis of pollution test results. The Texas-based firm’s three largest refineries – two in Texas and one in Louisiana – are the nation’s top three emitters of small particulate matter, according to the analysis of the latest tests submitted to regulators by the nation’s 10 largest refineries. The three Exxon refineries together averaged emissions of 80 pounds per hour, eight times the average rate of the seven other refineries on the top-ten list, some of which are larger than Exxon’s plants, the analysis shows...”

Study Blames Climate Change for 37 percent of Heat Deaths Worldwide. NBC News has details: “More than one-third of the world’s heat deaths each year are due directly to global warming, according to the latest study to calculate the human cost of climate change. But scientists say that’s only a sliver of climate’s overall toll — even more people die from other extreme weather amplified by global warming such as storms, flooding and drought — and the heat death numbers will grow exponentially with rising temperatures. Dozens of researchers who looked at heat deaths in 732 cities around the globe from 1991 to 2018 calculated that 37 percent were caused by higher temperatures from human-caused warming, according to a study Monday in the journal Nature Climate Change…”