Lukewarm and Quiet – Sliding Into a Cooler, Wetter Pattern? 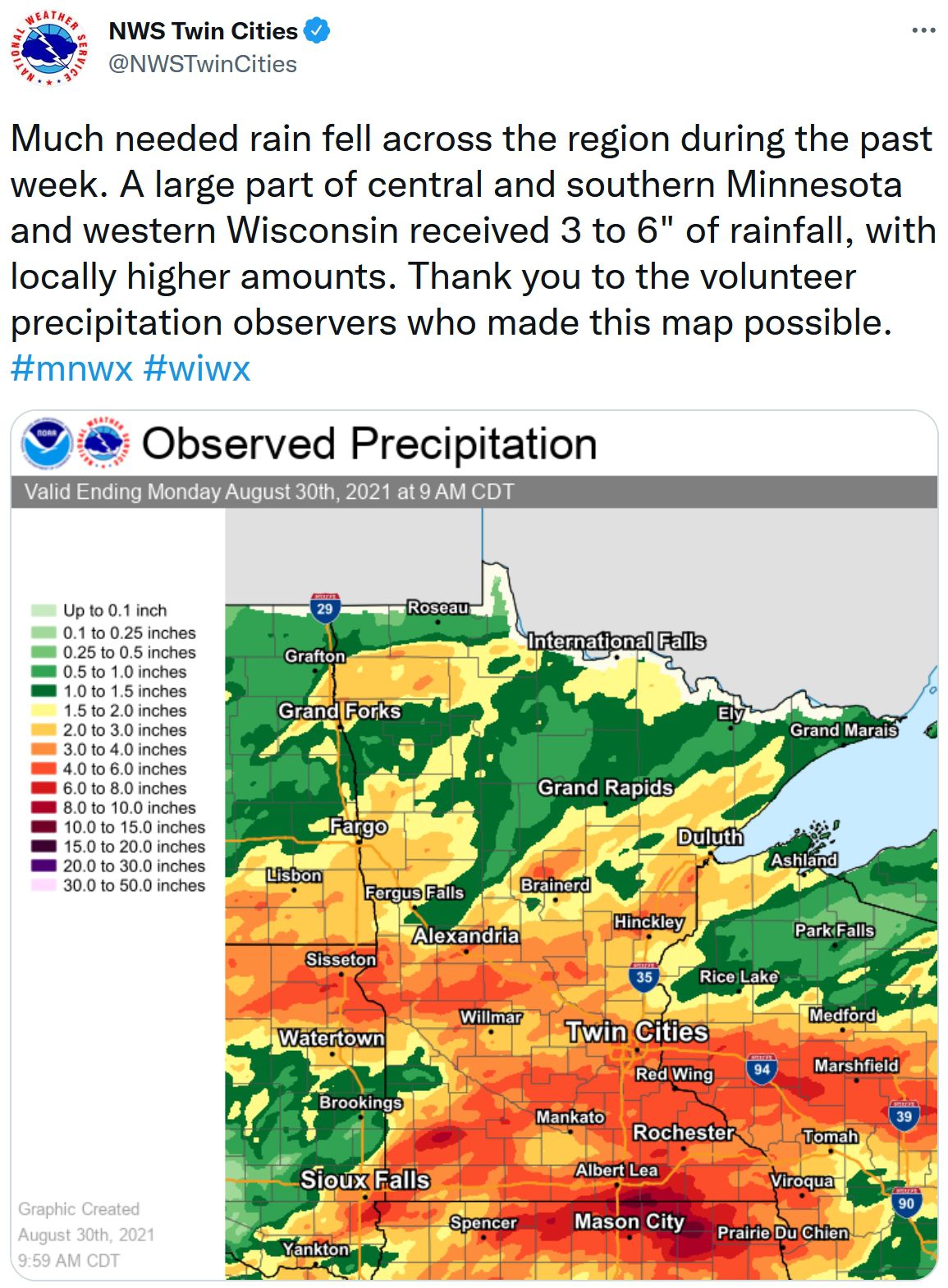 I’m OK With A Quiet Spell of Weather

Most days I’m just a bewildered spectator trying to connect the weather-dots. Right now I’m amazed by how much of America is either on fire or underwater. And weather models have consistently underestimated the ferocity of hurricanes, heatwaves, fires and floods in 2021.

Keep in mind this is happening with an average of 2F of warming, worldwide. I can’t imagine what 4-5F of warming might bring. Let’s hope it doesn’t come to that.

For now I am grateful for sunny days and an easing drought. We aren’t close to being out of the woods yet – my hope is that last week’s 4: 3-6” rain for much of central and southern Minnesota was a turning point, a possible shift in a fickle weather pattern.

Lukewarm sunshine today and Wednesday is followed by another spirited round of showers and T-storms Thursday. A pop-up storm may stalk you late Saturday with a few light showers on Sunday. Expect highs in the 70s. Normal weather. Imagine that.

Meanwhile soggy remnants of Ida will spark serious flooding from Nashville to New England this week.

Dry Weather Into Wednesday. Showers and T-storms track south and west of Minnesota for the next 36 hours with lukewarm sunshine and temperatures closer to average for late August. Yes, we need more rain (it’s coming) but I’m happy for a few mild, blue-sky days.

Unsettled and Showery Thursday Into Sunday. The approach of cooler, Canadian air destabilizes the atmosphere with a good chance of showers and T-storms Thursday. We dry out a little on Friday before the next blip of cooler air sets off T-storms Saturday (better chance north of MSP) with a few light showers or sprinkles lingering into Sunday.

No Rush Into Autumn. I still suspect September will wind up milder than average with more 80s, possibly another shot at 90 degrees – and with any luck showers and storms will become a bit more frequent in the weeks to come.

In the History of Hurricane Names, “I” Stands for Infamous. The come at the midpoint of the hurricane season when ocean water temperatures are warmest, capable of fueling the most intense hurricanes. A little interesting trivia courtesy of Capital Weather Gang: “Isabel. Ivan. Ike. Irene. Irma. And now Ida. These terrible hurricanes, all of which have occurred since 2003, begin with a common vowel. They haven’t all started with the same letter by chance — there is some science behind the abundance of notorious storms starting with the letter “I.” Since 1953, storms have been given human names to make identifying them more convenient. For 26 years they were given only female names, but in 1979 the male-female alternating alphabetical lists that we use today were introduced…”

Coffee May Reduce Risk of Death from Stroke and Heart Disease. Keep slurping up those iced vanilla lattes, based on new research highlighted at CNN.com: “…It’s another home run for coffee consumption. Studies have found drinking moderate amounts of coffee can protect adults from type 2 diabetes, Parkinson’s disease, liver disease, prostate cancer, Alzheimer’s, computer back pain and more. When it comes to heart disease, a large analysis of data from three major studies published in April found that drinking one or more cups of plain, caffeinated coffee a day was associated with a long-term reduced risk of heart failure. Compared with people who didn’t drink coffee, the April analysis found the risk of heart failure over time decreased between 5% and 12% for each cup of coffee consumed each day in two of the studies…”

35 Outlawed Baby Names From Around the World. Mental Floss has the disturbing details: “…Here in the U.S., we give parents a lot of leeway when it comes to naming their children. New Jersey only bans names that include obscenities, numerals, or symbols, so the Campbells were totally in the clear when naming their children Adolf Hitler and JoyceLynn Aryan Nation. And no one could stop Penn Jillette from naming his daughter Moxie Crimefighter. Other parts of the world aren’t as liberal when it comes to baby-naming. In 2017, the Swiss court in Zurich ruled against a couple who wanted to use “J” as one of their daughter’s middle names, as a tribute to her great-grandparents, Johanna and Josef…”

August 31, 1949: The earliest snowfall on record for Minnesota occurs on this date. A trace of snow is recorded at the new Duluth airport.

Climate Change Lurks Behind Ida’s Unnerving Intensification Rate. Andrew Freedman provides needed perspective on rapid intensification trends at Axios; here’s an excerpt: “…For example, a 2019 study in the journal Nature found there had been a trend in the Atlantic Ocean toward more rapidly intensifying storms between 1982 and 2009, and computer modeling showed that such a trend would not have been likely without human-induced climate change. A 2020 study published in the Proceedings of the National Academy of Sciences found that tropical cyclones are more likely to reach higher categories across much of the globe, including the Atlantic. And an especially ominous 2017 study published in the Bulletin of the American Meteorological Society found that a storm that intensifies by 70 mph in the 24 hours before landfall, which occurs about once every century today, could occur as frequently as every five to 10 years by the end of this century…”

Ida Intensified Rapidly, Supercharged By Warm Ocean Temps: Climate Nexus has more perspective, headlines and links: “While the total loss and damage caused by Hurricane Ida will not be known for some time, the storm’s impact will be greater than the sum of its ferocity because of the speed with which it became such a massive storm. In addition to the storm’s overall intensity, rainfall, and storm surge — all of which are major parts in what makes hurricanes so destructive — warmer ocean temperatures due to fossil-fueled climate change are contributing to hurricanes’ rapid intensification. Supercharged by exceptionally warm ocean waters running as much as 8°F hotter than average, Hurricane Ida intensified from a Tropical Storm on Friday with sustained winds of about 65 mph to nearly a Category 4 monster with winds twice as strong by early Sunday morning. It blew through the official threshold for rapid intensification in just 6 hours. “Rapid intensification is the new normal intensification,” longtime South Florida meteorologist John Morales tweeted. Rapid intensification in general, and Ida’s in particular, make storms more dangerous because it limits officials’ ability to warn residents and call for, or mandate, evacuations, which take more time to do safely than a storm that quickly strengthens will allow. Ida’s storm surge was also so great it reversed the flow of the Mississippi River.” (New York Times $, Washington Post $; Timeline: Weather Underground; Mississippi flow: Bloomberg $; Mandatory evacuation timing: Black Wall Street Times; Climate Signals background: Hurricanes, Storm surge, Extreme precipitation, Atlantic hurricane intensity)

U.S. to Set Up Office to Address Climate Change Issues. Reuters has a brief blurb: “The U.S. Department of Health and Human Services said on Monday it would establish an office to address climate change and health equity at the national level. The office would protect vulnerable communities disproportionately impacted by pollution and climate-driven disasters, including drought and wildfires, the department said in a statement...”

Athens Just Named a Chief Heat Officer. Should Your City Do the Same? I haven’t seen this before. Fortune Magazine has the post; here’s a clip: “…As heatwaves pick up in the Greek capital, testing the limits of the ancient city of 3.7 million, residents are adopting new behaviors to beat the scorching heat, and authorities are hunting for fresh tactics to keep the populace from overheating. Climate change is sending temperatures soaring across the globe, making the unbearably hot summer a new reality in cities like Athens. At the same time, officials are scrambling for ways to manage extreme weather conditions to minimize the impact in communities. More and more, they’re turning to specialists for help. In July, Athens mayor Kostas Bakoyannis mandated Myrivili with the task of focusing on just about everything related to heat and the city…”