Mellowing Temperatures – Shot at 70F and Thunder Next Week

Weatherwise, Things Are Looking Up

According to the Twin Cities National Weather Service, since 1990 extreme heat is the third greatest weather-killer in Minnesota, behind tornadoes and floods. The “Heat Index” can help to gauge risk, but it assumes shady areas and very little wind. Exposure to direct sunlight can make it feel 15 degrees hotter
than the index says.

An average of 28 tornadoes have touched down on Minnesota every year since 1950. 113 tornadoes hit Minnesota in 2010, the most in the nation. 71 of those came in June of 2010. All it takes is one tornado in the wrong place at the wrong time.

Nothing severe is brewing, just a gradual warming trend. A more moderate, Pacific flow from the west will
mean 50s this weekend, and a few days in the 60s next week. A few thunderstorms may bubble up late next week, but humidity levels are too low for a significant severe outbreak in the near term.

By the way, the Weather Service says this week’s chill was the 6th coldest on record for late spring at MSP. Glad that’s behind us!

GFS guidance for MSP above courtesy of WeatherBell. 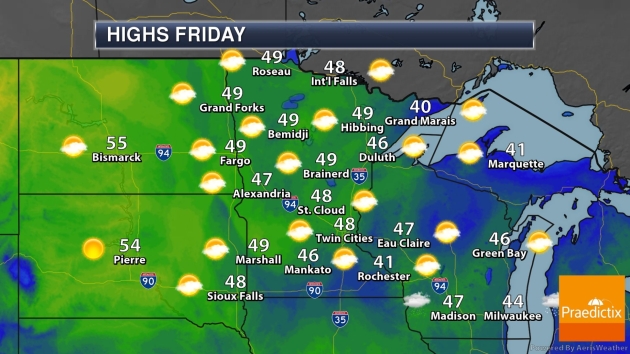 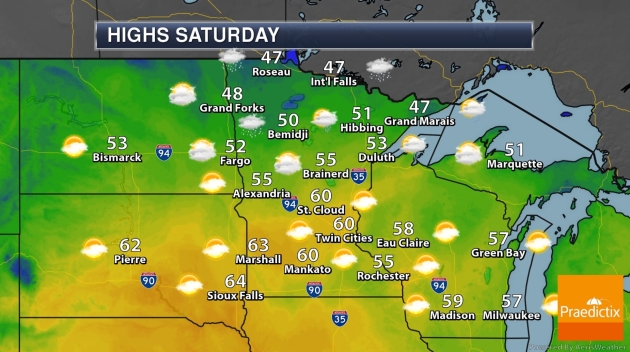 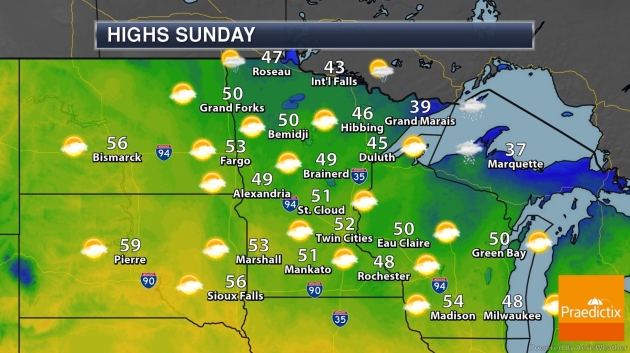 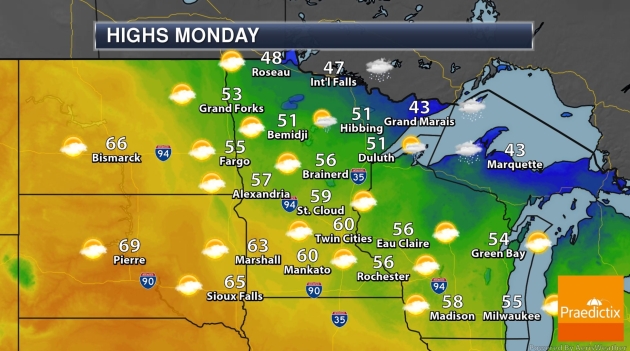 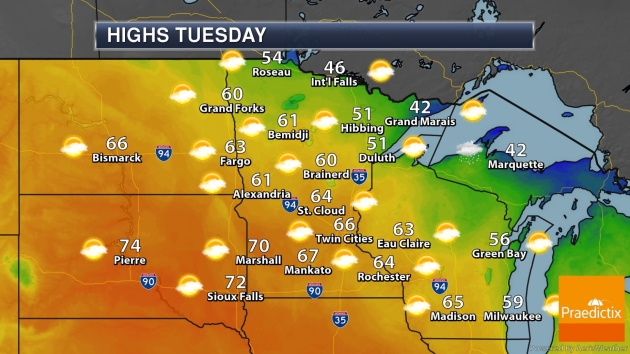 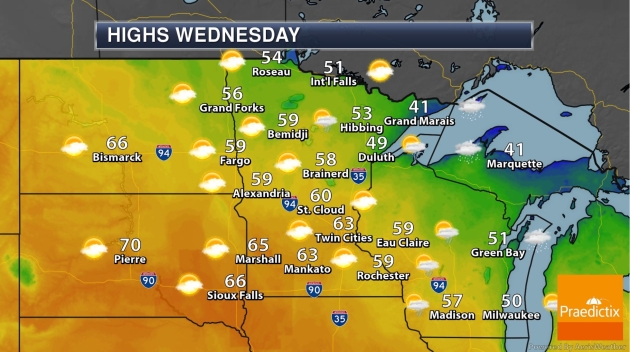 Risk of Spring Next Week. Temperatures come close to average again by Saturday – next week we may enjoy a few days with daytime highs 5-10F above average for a change. No storms expected between now and the first half of next week. Map sequence above: Praedictix and AerisWeather. 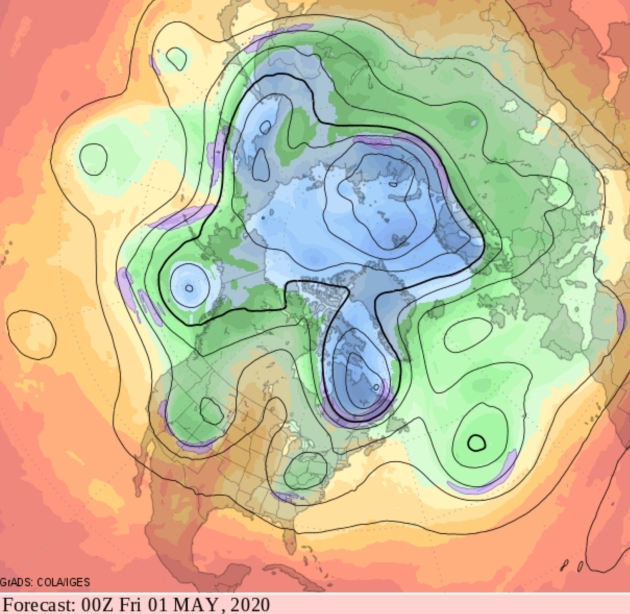 Omega Block. GFS guidance is hinting at closed lows in the western USA and the Appalachians, with a warm ridge of high pressure over the central USA – which would imply a significant warm bias for Minnesota as we sail into early May. Let’s see if it’s real.

Minnesota Tornado Climatology. The Minnesota DNR has a good summary, an overview of tornadoes in Minnesota; here’s an excerpt: “…In Minnesota, tornadoes have occurred in every month from March through November. The earliest reported tornadoes in Minnesota were the three tornadoes that touched down on March 6, 2017 .The previously earliest verified tornado in Minnesota occurred on March 18, 1968, north of Truman in Martin County. The latest in any year on November 16, 1931, east of Maple Plain. Historically and statistically, June is the month of greatest frequency with July not far behind. May has the third greatest frequency, followed closely by August. Nearly three-quarters of all tornadoes in Minnesota have occurred during the three months of May (15%), June (37%), and July (25%). The most probable danger period in Minnesota, therefore, is late spring and early summer, between 2:00 PM and 9:00 PM. However, tornadoes can and do occur at any time of the day or night…”

Incredible Stories of Survival Emerge from Tornado Outbreak; At Least 35 Dead. Weather.com has a recap of the devastating tornadoes that swept across Mississippi and much of the Deep South earlier this week: “The long process of healing and rebuilding is underway after storms and dozens of tornadoes slashed a deadly and destructive path across the South, killing at least 35 people and flattening hundreds of homes and businesses in several states. “This storm was as bad or worse than anything we’ve seen in a decade,” Mississippi Gov. Tate Reeves said on Monday. “We are used to tornadoes in Mississippi. No one is used to this.”…At least 85 tornadoes had been confirmed in nine states as of Wednesday afternoon. The severe weather started on Easter Sunday and continued into Monday from Texas and Arkansas, across Louisiana, Mississippi, Alabama and Georgia and into the Carolinas and Tennessee...”

Severe Weather Awareness Week: Floods and Flash Floods. Here’s the latest installment of helpful, potentially life-saving information from the Twin Cities National Weather Service: “…Floods claim nearly 200 lives annually, force 300,000 persons from their homes, and result in property damage in excess of 2 billion dollars. Characteristically, 75 percent of flash flood deaths occur at night with half of the victims dying in their automobiles or other vehicles. It may be difficult to believe, but many deaths occur when persons knowingly drive around road barricades indicating the road is washed out ahead. Assume a thunderstorm produces 6 inches of rain in less than 6 hours time near your community. Storms of this magnitude or greater occur several times each year in the U.S.  Would you know what action to take to protect yourself and the people who depend on you for safety? After a major flood event, one of the most common quotes from the survivors of the flood is the expression they did not believe it could happen to them or in their community...

Lightning Facts. This is Severe Weather Awareness Week in Minnesota and Wisconsin. Here are a few factoids about lightning, courtesy of the Twin Cities National Weather Service: “Every thunderstorm produces lightning, which on a national basis kills more people than tornadoes in a given year.

Lightning kills around 100 Americans annually, with about 300 injuries. In Wisconsin and Minnesota, there have been many deaths and injuries over the years, most in areas such as camp grounds, although people have been injured indoors when talking on the phone.

The following are some lightning safety tips…

Myths and facts about lightning…

Myth: If it’s not raining, there is no danger from lightning.
Fact: Lightning often strikes away from heavy rainfall, and may occur as far as 10 miles away from any rainfall. 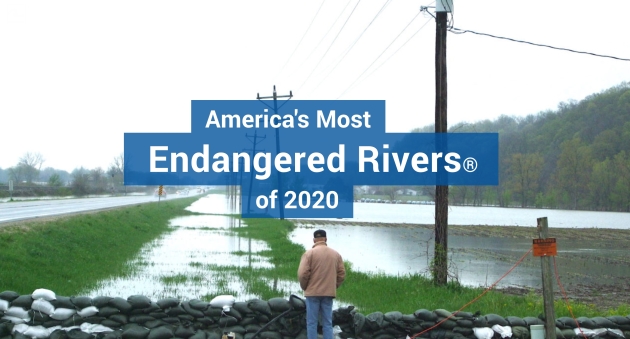 The report referenced in the USA TODAY article from American Rivers is here.

Bring Your Weather to Life at PWSweather.com. (full disclosure: the weather-data company, AerisWeather, is one of the weather-tech businesses I’m currently involved with). “At AerisWeather, we crank out code to help businesses around the globe harness the power of weather. We’re also weather hobbyists, meteorologists, and hardware enthusiasts. This underlying passion for our work led to the creation of PWSweather, an online platform that allows users to collect, manage, and share their personal weather station data. While many of you reading this are already familiar with the previous iteration, we are excited to share that PWSweather has received a significant face-lift. Welcome to the new PWSweather.com.”

Take a Swig of Refreshing Fauci Spring! Wait, Dr. Anthony Fauci has a beer named after him now? TMZ.com has more details: “Dr. Anthony Fauci fills our minds with crucial knowledge about the coronavirus, and now he can fill you up with a tangy brew, too — he’s got his own beer down South. Check out this new line that Wild Heaven Beer just rolled out, called Fauci Spring. The Georgia microbrewery decided to make a pale ale made with acai — the super-hip superfood that’s supposed to be good for your health. So, yeah … Fauci works. Fauci’s can is a deep sea blue, and they’ve also rolled out a companion lager … Don’t Stand So Close to Me. Clever and refreshing … if you’re looking for a laugh to go with your buzz…”
Coronavirus Got Rid of Smog. Can Electric Cars Do So Permanently? The short answer is yes, and it’s probably inevitable (due to falling prices for batteries, among a myriad of other factors). Here’s an excerpt from The Wall Street Journal (paywall) that caught my eye: “…This is where some of you dismiss me as a loon. Yeah, no. I am a pro-business, for-profit capitalist, almost innately centrist; and compared with the protectionists and market manipulators in D.C., I’m Milton frickin’ Friedman. What I am not is blinded by my age, my jingoism, my favorite cable-TV FUD-Rucker, or my comfort with the familiar, pining for the days of four-barrel carburetors. Fact: Most world governments, representing most of humanity and regulating about 85% of the global light-vehicle market, have committed to banning internal combustion-powered (IC) vehicles within 20 years, in favor of widespread vehicle electrification. Ask any CEO or board chairman of any car company...”
48 F. high yesterday in the Twin Cities.
58 F. average high on April 16.
68 F. high on April 16, 2019.
April 17, 1965: The Mississippi River at St. Paul has a record crest, 4 feet above the previous record. High water records would be set all the way down to Missouri in later days.

“Zombie Viruses”. Can They Escape the Thawing Arctic? A story at E&E News caught my eye; here’s the intro: “The Arctic is full of frozen viruses and bacteria. They’ve been found in everything from glaciers to permafrost, and often in the icy corpses of their buried victims. Most are thought to be harmless to humans. But some experts suggest that “zombie” pathogens are lurking in the ice, waiting to be set free by rising temperatures. The remote risk of old viruses causing new waves of contagion has gained attention as scientists around the world work furiously to understand the coronavirus sweeping over the globe. Just two decades ago, researchers were hoping to unravel the secrets of another pandemic: the 1918 influenza outbreak, which killed at least 50 million people worldwide...”

Renewable Sources Made Up 72% of New Energy Added in 2019. Here’s a clip from EcoWatch: “…Overall, the report found that renewable energy added slightly less overall capacity in 2019 compared to 2018, at 176 gigawatts (GW) compared to 179. However, the amount of new fossil fuel power added also declined, The Guardian pointed out. Renewables also grew 2.6 times more than fossil fuels and made up 72 percent of new energy capacity added, the report found. “Renewable energy is a cost-effective source of new power that insulates power markets and consumers from volatility, supports economic stability and stimulates sustainable growth,” La Camera said in a press release...”

Lawyering in the Age of Climate Change. When lawyers get involved and talk turns to corporate responsibility and liability, the conversation often shifts. The Stanford Law Review has links: “…From rising sea levels and warming cities to more extreme weather and crop failures, climate change has already begun to have a measurable impact on the world around us. The United States and other countries have taken a variety of steps to combat climate change in the hopes that we might avoid the worst consequences of a warming planet. But with governments’ climate change policies have come collective action problems, controversy, and, in due course, heavy involvement of lawyers. While the Stanford Law Review will not be able to host our 2020 Symposium, entitled Lawyering in the Age of Climate Change, in person this spring, we are thrilled to bring you a series of thought-provoking Essays from our scheduled participants addressing the role of lawyers in shaping our society’s response to climate change...”

Amazon Fires Climate Activist Employees For Speaking Out on Coronavirus: Climate Nexus has headlines and links: “Amazon has fired two employees who were leaders in the company’s employee climate movement for speaking out against working conditions at the e-commerce giant’s warehouse during the coronavirus pandemic. Maren Costa and Emily Cunningham, two user experience designers, were outspoken members of Amazon Employees for Climate Justice, and say they were dismissed last week for tweeting criticism of Amazon’s safety protections for warehouse workers and crowdfunding to purchase protective gear. Costa, a 15-year veteran of Amazon, was warned by the company late last year for criticizing its climate policies. Amazon has also fired warehouse workers Chris Smalls and Bashir Mohamed, who both have raised alarms and organized against the company’s lack of safety policies.” (Washington Post $, The Guardian, Reuters, Grist, Vox, Ars Technica, TechCrunch, Buzzfeed)

Earth Day Temperature Trends. Here’s an excerpt from Climate Central: “…Temperature trends aren’t flattening yet. In the above graphics, we show how annual temperatures have changed since the first Earth Day, locally and nationally. Temperatures have risen in 98% of the 242 cities analyzed, while the contiguous U.S. has warmed 2.4°F in those 50 years. Reno, Nev. leads this year’s cities with an increase of 7.4°F, followed by Las Vegas, Nev. (5.5°F) and El Paso, Texas (4.8°F). Many of the fastest-warming cities are in the Southwest, where spring is also the fastest-warming season. For more info, see our methodology or full rankings...”