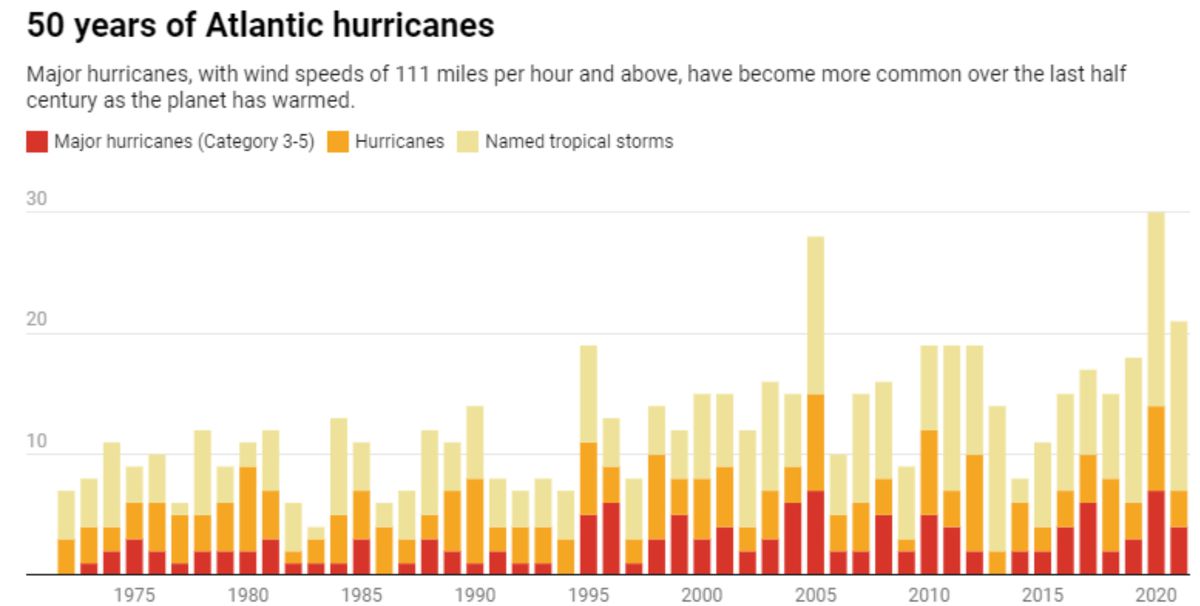 We get our fair share of wild weather but at least we don’t have to worry about hurricanes. When my self-satisfied Florida friends ping me in January to ask how I’m holding up, I gently remind them that Minnesota sees storms, but our storms don’t have names.

There is growing evidence that the hurricanes slamming into Florida and the Gulf Coast are stronger. NOAA reports that in the last 5 years there have been more Category 4 and 5 storms than in the previous 50 years combined. The water is warmer, hurricanes often intensify dramatically before coming ashore. “Alex” may douse Florida as a Tropical Storm on Saturday.

A cool, relatively dry pattern will be the rule here into next week with little chance of soaking rains, wild winds or hail the size of VW Beetles. Expect highs in the 60s and 70s with 80s returning by mid-June. Showers arrive Saturday with episodes of showery rain next week. No drought this summer and in spite of this cooler spell don’t write off our fair share of 90s by July.

Cleanup Begins After Suspected Tornado Devastates Town of Forada. WCCO-TV has an update on what we know: “A suspected tornado tore through the small west-central Minnesota town of Forada on Monday, leaving a trail of damaged homes and downed trees.Drone footage captured by WCCO-TV shows significant damage on homes near Maple Lake. Forada Fire Chief Stephen VanLuik said that at least 75 structures were “totaled” or “severely damaged.” “To see everything gone is incredible,” he said. “I really feel for the residents here in town,” he added. “They went through a lot.” The Douglas County Sheriff’s Office says that downed power lines and trees blocked, at one point, all roads leading into the town, which is located roughly 10 miles south of Alexandria. Crews have since deactivated the downed lines and cleared the debris…”

Minnesota Tornadoes, High Winds Destroy Buildings and Cut Power. StarTribune.com has details: “A line of strong storms including destructive tornadoes swept across Minnesota on Monday, leaving a dotted trail of damaged buildings, hail and power outages. At least 75 structures were damaged, numerous trees uprooted and stripped from an afternoon tornado and high winds that also left residents without power in the western Minnesota city of Forada, said Mayor David Reller. After going door-to-door, emergency responders knew of no fatalities or significant injuries Monday evening. Several hotels in neighboring Alexandria offered rooms to residents who needed them. “It’s tragic as far as physical damage,” Reller said, speaking from the town’s fire hall which was running on a generator. “We got hit hard, but we’ll come back strong…”

Historic Flooding Causes Widespread Problems for Northern Minnesota. KARE11.com has the story: “Rising water levels across the Rainy River Basin this month have caused widespread flooding for resorts, cabin owners and residents in northern Minnesota, disrupting the start of the summer vacation schedule and creating uncertainty over the next several weeks. According to the National Weather Service, conditions have caused a “historic flood that has already exceeded the records set in the 2014 flooding, and could break all-time records” for some areas. The Rainy River Basin incorporates parts of northern Minnesota and Ontario, covering a wide swath of land from Lake of the Woods all the way east past Ely…”

Comfortable – Saturday Puddles. No whining about heat and humidity until further notice with highs in the 60s and 70s. Expect blue sky into Friday, but a weak disturbance sliding south of Minnesota may brush the southern third of the state with rain showers on Saturday.

Heating Up Mid-June. I’m still waiting for a series of hot fronts, but sweaty days keep getting pushed back. The GFS 500mb outlook for mid-June shows sizzling heat for most of the USA, with the exception of Pacific Northwest and northern Rockies – but I suspect a rerun of muggy 80s is roughly 10-14 days out.

NOAA Researchers Seek to Learn More About Tornado Experiences to Improve Safety. NOAA has the post; here’s the intro: “Has a tornado hit your house or your community? Have you received a tornado alert? NOAA scientists want to hear your story. The new Tornado Tales citizen science tool is an online survey that provides a way for people to anonymously report their tornado experiences. Developed by researchers at the NOAA National Severe Storms Laboratory (NSSL), the tool will be used to better understand how people receive, interpret and respond to tornado information from NOAA. The survey asks basic questions to collect information about an individual’s responses to warnings and watches, including how they prepared for and monitored the weather and what safe space they used to shelter when a warning was issued by NOAA’s National Weather Service. This information can help NOAA identify areas where warning messages may not be resulting in the most safe and effective actions. This knowledge will help NOAA hone safety messages...”

Missouri S&T Tornado Simulator Helps Researchers Investigate Structure Failure. I need one of these. Missouri S&T has the story: “Tornadoes are so violent they often destroy sensors intended to record wind speed and pressure on commercial buildings, schools and homes, so there is no current technology to measure their real wind speed. Researchers at Missouri S&T are bringing tornadoes into the lab with a new simulator to model extreme cyclonic wind speeds and study how tornadoes destroy structures. The findings could then be used to update existing structures and influence new construction. “Currently, post-storm damage surveys are the primary way to determine a tornado’s strength using the EF scale,” says Dr. Grace Yan, associate professor of civil, architectural and environmental engineering at Missouri S&T. “With the simulator, we can reproduce real-world tornadoes in the lab environment to discover the true failure mechanisms in civil structures...”

Summer Not Your Favorite Time of Year? You’re Not Alone. Another heaping serving of summer, please. CNN.com has the post: “…This one surprised me a little bit. Most people prefer warmer to cooler weather, and I always remembered summer being free time. Yet just 29% of Americans said summer was their favorite season in a 2020 CBS News poll. Fall (27%) and spring (25%) were right within the margin of error. A previous CBS News poll from 2013 had spring and summer tied at 33% for favorite season. Polling often doesn’t show any of the meteorological summer months (June, July or August) to be the favorite of Americans. Frequently, it’s May, October or December. Of course, there are regional variations. Americans in the northern part of the country are far more likely to list summer as their favorite season than those in the South. Southerners are more likely to list spring…”

Floods, Landslides Kill At Least 91 In Brazil: Climate Nexus has headlines and links: “At least 91 people are dead, with more than two dozen still missing after heavy rains set off mudslides in flooding in northeastern Brazil over the weekend. Climate change, caused mainly by the extraction and combustion of fossil fuels, increases the potential for extreme precipitation. The fourth major flooding event in the country in five months, the destruction of informal housing on hillsides prone to collapse highlights the interconnection of housinginjustice and the inequitably-borneimpacts of climatechange.” (AP, CNN, Reuters, BBC, Reuters, CNN, Reuters; Climate Signals background: Extreme precipitation increase)

Bioplastic from Bees? A post at TechCrunch caught my eye: “Humble Bee Bio is on a mission to create a biodegradable alternative to plastics by synthesizing the biology of bees. While the New Zealand-based company is still at an early stage — it’s about halfway through its proof of concept — if Humble Bee is successful, its bioplastics are likely to make it into the sustainable textiles industry. Humble Bee, which just raised $3.2 million (NZD $5 million) in convertible notes as part of its Series A, has been studying the Australian masked bee, a type of solitary bee that doesn’t make honey, but does make a nesting material for laying larvae in, which has many plastic-like properties...”

NASA Says “Something Weird” is Happening in the Universe. No kidding. Here’s a clip from a story at Audacy.com: “…Scientists have been studying new data from the Hubble telescope, and they say that the universe’s expansion rate is much quicker than previously thought. The research has found that to a precision rate of just over 1%, the universe will double in size in 10 billion years. Adam Riess of the Space Telescope Science Institute and the John Hopkins University in Baltimore, Maryland, shared that the measurements they are now getting are more accurate than ever before. “You are getting the most precise measure of the expansion rate for the universe from the gold standard of telescopes and cosmic mile markers,” Reiss said...”

June 1, 1993: St. Cloud records its latest ever freezing temperature, with a record low of 32.

“In the Crosshairs”: Department of Navy Releases Climate Change Strategy. NavyTimes.com explains why the US Navy is concerned about a rapidly changing climate: “The Department of the Navy this week released its strategy for how it will deal with climate change and proceed toward the government’s goal of net-zero greenhouse gas emissions by 2050. “Climate change is one of the most destabilizing forces of our time, exacerbating other national security concerns and posing serious readiness challenges,” Navy Secretary Carlos Del Toro said in the introduction to the 32-page report. “Our naval and amphibious forces are in the crosshairs of the climate crisis and this strategy provides the framework to empower us to meaningfully reduce the threat of climate change.” Setting the department on a course to combat climate change is a main priority of Del Toro’s tenure. He called the issue “existential” for the Navy and Marine Corps...”

Bottling the Sun. Are we any closer to clean, abundant fusion energy? CNN.com takes a deep dive: “From a small hill in the southern French region of Provence, you can see two suns. One has been blazing for four-and-a-half billion years and is setting. The other is being built by thousands of human minds and hands, and is — far more slowly — rising. The last of the real sun’s evening rays cast a magical glow over the other — an enormous construction site that could solve the biggest existential crisis in human history. It is here, in the tiny commune of Saint-Paul-lez-Durance, that 35 countries have come together to try and master nuclear fusion, a process that occurs naturally in the sun — and all stars — but is painfully difficult to replicate on Earth. Fusion promises a virtually limitless form of energy that, unlike fossil fuels, emits zero greenhouse gases and, unlike the nuclear fission power used today, produces no long-life radioactive waste. Mastering it could literally save humanity from climate change, a crisis of our own making…”

What is The First Movers Coalition? In many cases corporations are out ahead of government in implementing strategies and new technologies to get to net zero GHG emissions (faster). Here’s an overview: “The First Movers Coalition is a global initiative harnessing the purchasing power of companies to decarbonize seven “hard to abate” industrial sectors that currently account for 30% of global emissions: Aluminum, Aviation, Chemicals, Concrete, Shipping, Steel, and Trucking; along with innovative Carbon Removal technologies. The 50+ companies who make up the Coalition seek to send a powerful market signal to commercialize zero-carbon technologies. The First Movers Coalition’s unique approach assembles ambitious corporate purchasing pledges across the heavy industry and long-distance transport sectors responsible for a third of global emissions. For these sectors to decarbonize at the speed needed to keep the planet on a 1.5-degree pathway, they require low-carbon technologies that are not yet competitive with current carbon-intensive solutions but must reach commercial scale by 2030 to achieve net-zero emissions globally by 2050...”