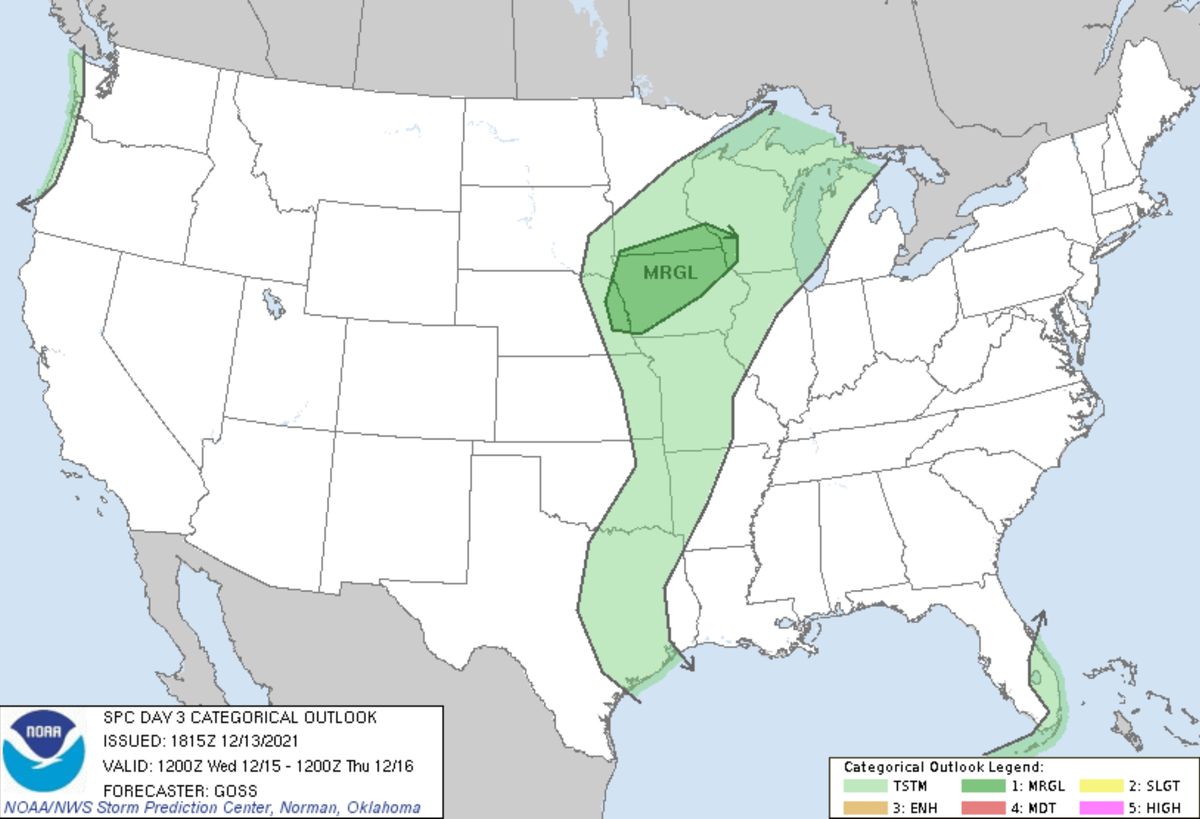 My Winter Coping Skills: 1). Proper clothing. 2). “Yak Trax” (chains that slip over your boots to avoid sliding down the hill). 3). AWD (not optional at this latitude). 4). At least one warm weather getaway in February, if possible and 5). Calendar: Winter Solstice is 1 week away. On Christmas Day MSP picks up an additional minute of daylight. That’s a psychological turning point for me.

A quiet Tuesday gives way to a strange temperature spike Wednesday with 50s, rain – even a stray T-storm late in the day. NOAA SPC has southern Minnesota in a “Marginal Risk” of severe storms. Huh? Just when you thought 2021 couldn’t get weirder.

A changeover to snow is likely Wednesday night with a few inches of slush up north, but I don’t see much snow through Christmas for the Twin Cities, and only 2- 4” of additional snow over central and northern Minnesota by December 25.

Pondering the models I do see a return of noticeably colder weather after Christmas, but no prolonged polar punches through late December.

I can live with that.

Slush or Strong T-storms? Take your pick – potentially something for everyone (including 50s in the metro; even 60F over far southeast Minnesota on Wednesday). Good grief.

Dreaming of a White Christmas? Your dreams may come true, depending on where you live, of course. The latest 30-year averages, courtesy of NOAA, show some shifts: “…Minnesota. Maine. Upstate New York. The Allegheny Mountains of Pennsylvania and West Virginia. Practically anywhere in Idaho. And of course, the Rockies or the Sierra Nevada Mountains. These are the parts of the United States where weather history suggests you want to be if you’re looking for the best chance of a white Christmas. This map shows the historic probability of there being at least 1 inch of snow on the ground at weather stations across the United States on December 25 based on the latest (1991-2020) U.S. Climate Normals from NOAAs National Centers for Environmental Information (NCEI). Using those station data, experts interpolated values for all locations in the Lower 48...”

Predicted Snowfall by December 23. ECMWF predicts a little slush for the metro, with 2-4” for much of central and northern Minnesota, coming in a few shots between now and next Thursday.

Mild Wednesday – Chilly Weekend Coming. After peaking in the 50s Wednesday afternoon temperatures will tumble Wednesday night, and by the latter half of the week there will be no doubt in your mind that it’s mid-December.

Colder, Potentially Snowier Pattern After Christmas? Confidence levels are low, but GFS guidance suggests a southward shift of the jet stream with enough cold air in place over northern tier states for a series of snow-producing storms. We’ll see.

Live Updates: Kentucky Tornado Death Toll Now at 67, with 100+ Unaccounted For. The Louisville Courier Journal has continuous updates on the toll Friday’s unprecedented December outbreak has had on Kentucky: “Communities across Western Kentucky and the state are still reeling as a new work week begins from tornadoes that leveled factories, courthouses, homes and more. Over 60 deaths had been confirmed across the commonwealth, but that number was expected to rise. And more than 1,000 properties were destroyed, Gov. Andy Beshear said. The full depth of the impact of the storms was expected to come into focus as search and rescue efforts continued in cities such as Mayfield, Bowling Green and Dawson Springs. Organizations were also gearing up to keep donation drives and other charitable efforts going…”

How to Help Tornadoes in South and Midwest. Here’s an excerpt with links on how to donate from ABC News: “…While it continues to assess the damage, Red Cross officials said the organization is accepting donations to help the victims. Anyone interested in helping can log onto redcross.org or call 800-RED CROSS. Mobile phone users can send a quick $10 donation simply by texting “REDCROSS” to the number, 90999. CARE, the international aid organization based in Atlanta, has provided water, food, shelter, and cash assistance to the families affected by the tornadoes. The organization has set up a donation fund for those services...”

The Real Truth About Tornadoes. How strong is the climate signal? Here’s an excerpt of a recent Op-Ed at LiveScience.com: “…Research data show that climate change caused by human behavior is fueling more frequent and intense weather, such as extreme precipitation and heat waves — so it’s only natural to wonder if this applies to tornadoes, too. Scientists need more data and time to fully address that connection. That said, some high-profile scientists are misleading the American public about what is, and is not, known about global warming and tornadoes. [Something Is Rotten at the New York Times (Op-Ed)] For instance, University of California, Berkeley, professor Richard Muller argued in a recent New York Times opinion piece that “the scientific evidence shows that strong to violent tornadoes have actually been decreasing for the past 58 years, and it is possible that the explanation lies with global warming.” The honest “truth” is that no one knows what effect global warming is having on tornado intensity. Tornado records are not accurate enough to tell whether tornado intensity has changed over time...”

As Floods Slam More US Firms, $50 Billion Economic Drag Expected. Thomson Reuters Foundation has an analysis: “American businesses stand to lose more than 3 million days of operations from flooding in 2022 and will face worsening economic fallout in the coming decades as climate change fuels ever more extreme weather events, researchers said Monday. Next year’s expected damage, based on estimated trends, translates to a nearly $50 billion annual hit for local economies in cities from Miami to Pittsburgh, according to First Street Foundation, a non-profit group that maps climate risk. In a new study, researchers there took a rare comprehensive look at the expected flood risk to businesses and local economies in the United States – a threat often underestimated amid a focus on flooded homes and family losses. “It’s a whole other dimension of flood risk,” said Jeremy Porter, head of research and development at First Street Foundation...”

“Zero Day” for California Water? Not Yet, but Unprecedented Water Restrictions Send a Sharp Warning. The Conversation has details: “On Dec. 1, 2021, California triggered headlines heard around the world when officials announced how much water suppliers would be getting from the State Water Project. “California water districts to get 0% of requested supplies in an unprecedented decision,” one headline proclaimed. “No state water for California farms,” read another. The headlines suggested a comparison with the “Zero Day” announcement in Cape Town, South Africa, during a drought in 2018. That was the projected date when water would no longer be available at household taps without significant conservation. Cape Town avoided a water shutoff, barely...”

5 Tips on How to Escape an Erupting Volcano. Just in case you were wondering, Mental Floss has good advice, including “doing nothing”: “…Some people live on erupting volcanoes all the time.” However, a lot of volcanoes are monitored—among the tools scientists use are observatories, seismic stations, GPS measurement of hillsides inflating or deflating, satellites keeping an eye from space, and so on—and most volcanic activity is fairly small-scale. “The smaller the eruption, the more common it is. It’s just a natural part of what the planet is doing,” she says. Most of the time you don’t need to do a thing, as there are experts all over the world keeping an eye on volcanic activity and are well positioned to anticipate—and alert you to—anything dodgy approaching on the ol’ magma front...”

Tornado Outbreak Offers Climate Warning. Andrew Freedom does a good job of explaining what we know and don’t know – highlighting emerging science regarding attribution. It looks like an apparent south/east shift of traditional Tornado Alley may be a climate signal. Here’s a blurb from Axios: “…Tornado trends, such as a shift in their geographic distribution, and increased variability from year to year, are what scientists expect to see in a warming world, according to Gensini.

How the Climate Crisis is Affecting Tornadoes. CNN.com has a good explainer about “attribution” – how a warming climate may be impacting tornado frequency and intensity: “…When you start putting a lot of these events together, and you start looking at them in the aggregate sense, the statistics are pretty clear that not only has there sort of been a change — a shift, if you will — of where the greatest tornado frequency is happening,” Gensini told CNN. “But these events are becoming perhaps stronger, more frequent and also more variable.” Research by Gensini found that over the past four decades, tornado frequency has increased in vast swaths of the Midwest and Southeast, while decreasing in parts of the central and southern Great Plains, a region traditionally known as “tornado alley.” Some studies also indicate climate change could be contributing to an eastward shift in tornado alley, for instance, resulting in more tornadoes occurring in the more heavily populated states east of the Mississippi River, such as this tornado outbreak…”

As Winters Warm, Minnesota Lakes Have Lost About Two Weeks of Ice Coverage Over Last 50 Years. Star Tribune reports: “Minnesota lakes are losing one of the main things that makes them special: ice. Winters have warmed to the point that the state’s lakes have lost an average of two weeks of ice coverage since the late 1960s, according to data released Friday by the Minnesota Pollution Control Agency and Department of Natural Resources. The loss of ice has been one of the main drivers of toxic algae blooms, which have shut down lakes across the state, as well as a key reason that walleye, cisco, lake trout and other cold water-loving fish have been struggling and losing territory to species such as bass. “Fish are cold-blooded, and temperature is the driving force to every aspect of their lives, including reproduction and survival,” said Sarah Strommen, DNR commissioner. “Many lakes are becoming unsuitable for walleye and they’re becoming too hospitable for invasive species...”

Minnesota Winters Trending Milder Over Time. Minnesota Reformer takes a look at all the ways our winters are being transformed – in slow motion: “…Minnesota winters are warming 13 times faster than our summers, researchers say. And although it can still feel never-ending, our coldest season is getting shorter. The growing season is two weeks longer than it was in the 1950s, according to the Minnesota Climate Adaptation Partnership. As overall winter temperatures trend warmer, we’re experiencing fewer days of extreme cold. This chart shows the number of days each year with daily high temperatures below zero in the Twin Cities. Dark blue lines indicate more days below zero, and white lines indicate no below-zero days that year. Since 1900, there have been 24 years in which Twin Cities daily high temperatures never dipped below zero. Nine of them took place between 2000 and 2020, compared to just two such years between 1900 and 1920...”

2021 in Review: The World Promises Change After Another Year of Extreme Climate Disasters. Here’s the intro to a photo-heavy review from Bloomberg: “This will go down as among the hottest of the past 170 years, and the horrors of global warming were on full display. There were deep, possibly permanent drought conditions in some countries, devastating floods in others, and ever-more destructive wildfires. Greek villages burned, riverbanks burst in Germany and Brazil’s farms frosted over. If one heat wave stood out from the pattern, it was in the usually temperate region of North America’s Pacific Northwest. It was also a year of climate breakthroughs, both technological and political. Wind power and batteries kept getting cheaper and better. The proportion of new electric passenger vehicles sold worldwide has now reached 10% of the total, according to BloombergNEF. In Iceland, meanwhile, the largest complex ever built to remove carbon dioxide from the air sprang to life...”