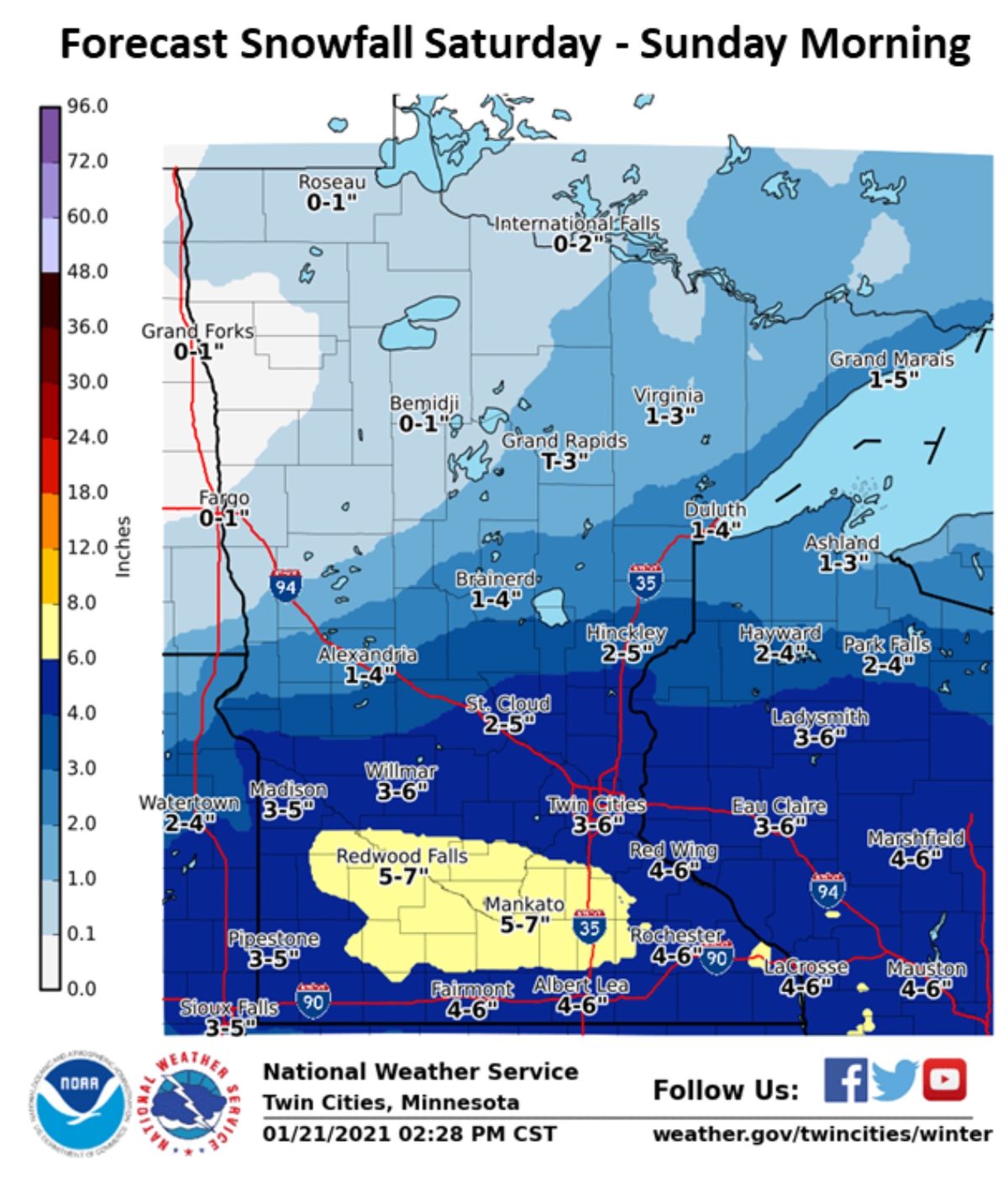 We need a better way to set expectations for winter storms. “How many inches?” doesn’t capture potential impacts from timing and temperature. A lousy inch of snow at 15F can be far worse on highways than 6 inches at 32F.

The reason cold storms are more challenging? Salt loses its effectiveness melting snow and ice when the mercury dips below 20F or so. At 32F most freeways will be wet and slushy. At 15F even major highways and interstates will be snow covered and icy.

This time around we’ll have a dome of arctic air in place for Saturday’s snowfall. I’m getting my errands done Saturday morning, because snow arrives in the afternoon and continues Saturday night – a light, powdery fluffy snow. Models suggest 3-6 inches, with the best chance of 5 or 6 inches south of the MSP metro.

More snow is possible next Wednesday, but weather models bring a puff of Pacific air into Minnesota from late January into early February. A thaw is likely.

Temperatures may be rising for the first time in six months, but February often brings subzero zingers.

Snow Reaches MSP Metro Midday Saturday. A shield of light snow should spread from west to east across the state – roads may be snow covered and very slick by mid or late afternoon on Saturday.

Plowable. I’m still a little gun-shy from the last 2 storms, which were unusually fickle and yes, the models (and meteorologists, myself included) overestimated snowfall totals. The last storm brought temperatures in the 30s, this time around the mercury will be in the teens, meaning powdery snow and snow:rain ratios of 17:1. This could be perfect (Aspen-like) snow for winter weather lovers.

Spaghetti Plot. Models are zeroing in on a 3-6 or 3-7” range for snowfall in the Twin Cities. Latest NOAA NAM guidance prints out .32” of water, which translates into 4-6”. We’ll see.

Upper Midwest Snowcover. There’s a pretty sharp cut-off to snowcover; a lot of brown out there are close as South Dakota and much of Illinois.

Colder Than Average. This may be as cold as it gets until mid-February at the rate we’re going. Temperatures edge closer to average next week with another chance of accumulating snow next Wednesday.

Cold Phase Gives Way To Another Thaw. Both GFS and ECMWF are fairly consistent run to run, showing a warming trend late next week; perhaps a run of temperatures near freezing into the first few days of February before the next inevitable correction.

Tell Me If You’ve Heard This Before: Mild Pacific Signal. Brief relapses of cold air sandwiched between longer (milder) spells of weather, flavored by steering winds blowing from the Pacific, not the Yukon. The pattern still looks significantly milder than average into at least the first week of February.

Winter at Half-Way Point. Details from a good post at the Minnesota DNR: “…Without a doubt, the first half of the 2020-21 winter has been warm. In some places, it has been rather snowy too.The warmth has been most noteworthy in far northern Minnesota, where International Falls ranked 3rd warmest for November 1 through January 15, and 2nd warmest for December 1 through January 15. Rochester and St. Cloud recorded top-10 warmth for both periods, and the Twin Cities and Duluth were in or very near the top-10 as well. Each station was above the 90th percentile for temperatures since both November 1st, and December 1st. In other words, the first half of winter has been warmer than more than 90% of other first-halves of winter in Minnesota. Snowfall for the season through January 15th was above the 80th percentile in Duluth, St. Cloud, and the Twin Cities, but near the middle of the pack or slightly low in International Falls and Rochester…”

4 Ways to De-Ice Your Driveway. I could use this right about now. Mental Floss has some helpful suggestions: “…Salt has the ability to lower water’s freezing point, so you’ll often find people salting any potentially slick area when a storm hits. More than 20 million tons of salt are used on icy surfaces each year. Rock salt is usually the cheapest option; you can find 50-pound bags of it for under $10 at many home improvement stores. First, shovel away any snow that’s on top of the icy surface, then sprinkle small amounts of rock salt onto the ice. While this should help, temperature is a big factor here: Salt doesn’t fight ice very well when it’s colder than 20°F outside. Another thing to keep in mind: Rock salt contains properties that make it harmful to pets and plants. Excessive salting isn’t very good for vehicles or concrete, either, so it’s best to use the material sparingly...”

21 Reasons to Hope in 2021. I needed some good news and found it in a post at Fast Company; check it out here.

6” snow on the ground in the Twin Cities.

January 22, 1936: Perhaps the coldest wind chill the Twin Cities has ever seen occurs on this day; it hits -67 with the new wind chill formula (-87 with the old formula). The temperature was -34 with a wind speed of 20mph. All traffic in the Twin Cities was severely hampered and a number of fatalities were caused by the cold.

The U.S. is Officially Rejoining The Paris Agreement. Now Comes the Hard Part. HuffPost explains: “Hours after his inauguration Wednesday, President Joe Biden signed an executive order to rejoin the Paris Agreement, ending the United States’ brief but symbolic exit from the global pact to slash planet-heating emissions that virtually every nation has joined. Biden’s executive order kick-starts a relatively simple process. After sending a letter to the United Nations announcing its intentions to reenter the climate accord, the U.S. will again become a formal party to the global negotiations in 30 days. It was the third executive order he signed in the Oval Office. In separate executive orders, Biden is expected to lay the groundwork for the part that comes next and is much more of a challenge: reversing the Trump administration’s deregulatory legacy and setting ambitious new goals for decarbonizing the U.S. economy…”

Biden’s First Climate Actions Include Rejoining Paris Agreement. More perspective from Scientific American: “…The process of rejoining the Paris Agreement will begin today with a letter to the United Nations requesting U.S. membership. It will take 30 days for the U.S. to formally reenter the nonbinding global agreement to reduce emissions. The administration will also rescind the permit for the controversial Keystone XL pipeline, McCarthy said. The line transports crude from the western Canadian province of Alberta to refineries in Illinois and Texas and to other oil facilities in Oklahoma. McCarthy said the pipeline, which was rejected by the Obama administration and then restored by Trump as one of his first actions, works against the administration’s plans to aggressively address climate change and grow union jobs in the clean energy sector...”

Climate Change Concerns Prompt Americans to Consider Relocating. Climate refugees…in the USA? It’s already happening. NPR has an interesting interview; here’s an excerpt: “…ROPEIK: The Saums did end up moving but not in the west. They settled on northern New England and a house in a rural town at the foot of New Hampshire’s White Mountains. Doug says they call themselves climate migrants. DOUG SAUM: We had the idea that – not necessarily that we were going to a place that would be forever untouched by climate change but that we were getting out of a bad climate situation that was only likely to get worse. ROPEIK: Research suggests that climate-related hazards could soon play a role in prompting millions of Americans and people worldwide to relocate.

Trump’s Last-Minute Climate Maneuvers Face a Slow Dead End. Here is a clip from Bloomberg Green: “…The last-minute regulations were meant to gum up the works for Biden,” said David Doniger, senior strategic director for climate and clean energy at the Natural Resources Defense Council, an environmental advocacy group that filed numerous lawsuits aiming to block the Trump administration’s agenda. “But they were slow, incompetent, and did things that were illegal. They are already getting their comeuppance in the courts.” Eliminating or weakening regulation was a top priority from the start of the Trump presidency, but the mission took on an urgent focus after Biden’s win. In its last days the Trump administration took aim at major provisions ranging from fuel-efficiency standards in appliances to the rules for cost-benefit analysis under the Clean Air Act...”