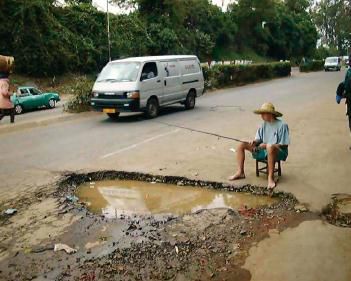 The Extended Outlook Calls for Potholes

Warm spikes, cold slaps, a few more slushy adventures by May? Nothing is off the table. One prediction with a 105 percent probability of verifying: a proliferation of pesky potholes.

The extended outlook calls for mud, and continued fluctuations either side of 32F for the next few weeks. Liquid water seeps into highway cracks and freezes at night. When water freezes it expands, which has the unfortunate tendency to make roads brittle and prone to potholes. Think of them as nature’s artificial speed bumps.

A storm tracking from Texas to Wisconsin pushes a surge of rain into Minnesota today into Wednesday, with some 1-inch totals possible. A good, steady soaking. Cold air wrapping into the backside of the storm may squeeze out a few inches of slush from Brainerd to Hibbing, but no (new) flakes are expected here in the Twin Cities.

A few rain showers Saturday give way to seasonably cool weather the rest of March. No parkas, but jacket-worthy. And please leave your driveway stakes in.

Classic March Storm. Mostly rain for most of Minnesota (with many spots picking up nearly an inch of rain by midday Wednesday). An inflow of colder air on the backside of today’s storm will cause rain to end as a few inches of slushy snow from Brainerd and Mille Lacs into the Minnesota Arrowhead.

Today: Wettest Day. Temperatures cool off a bit the latter half of this week, but 50 degrees should return by Saturday, as the mercury continues to trend above average, statewide. The best chance of weekend (rain) showers will come on Saturday, followedy by a sunnier, drier Sunday.

Wild Gyrations. I’m not taking any of these temperature model predictions at face value – just looking at trends from one model run to the next. There’s more variation than usual between ECMWF and GFS, and I’ll be shocked if the mercury really does approach 80F in the metro on April 2, but with the crazy winter we just had all bets are off.

Relatively Mild Start to April. NOAA CPC (Climate Prediction Center) keeps a mild bias going into at least mid-April, and the 2-week forecast for 500mb winds (GFS) confirms a warmer than average pattern for most of the USA the first week of April, with the exception of the Pacific Northwest.

Life-Threatening Floods Inundating Parts of Australia. CNN.com has an update: “More than 18,000 people have been evacuated from their homes in Australia’s New South Wales (NSW) as heavy rains and major flooding continue to inundate the state, causing some areas to resemble “inland seas.” Rains have been impacting communities since Thursday but flooding intensified over the weekend, with images showing roads, trees and houses completely submerged in floodwaters in some areas. Up to 38 places across the state are regarded as natural disaster areas and 19 evacuation orders have been issued, with potentially more to come, NSW Premier Gladys Berejiklian said in a news conference Monday…”

“1 in 100 Year Flood Event”? CNN.com has additional perspective on the scope of the flooding.

The 10 U.S. Counties With the Worst Air Pollution. The top spots (nobody wants) go to the Los Angeles area, according to new research highlighted at Newsweek: “…The findings of the Harvard Study were significant and alarming. They found an association between long-term exposure to PM2.5 air pollution and death from COVID-19. The United States adopted the Air Pollution Control Act of 1955, the first federal clean air legislation, several years after 20 people died and more than 7,000 others became sick due to extreme air pollution over Donora, Pennsylvania, in 1948. The Clean Air Act of 1990 in particular regulated the emission of pollutants from industry and motor vehicles. Nevertheless, experts and scientists have worried that over time, low-level exposure to air pollutants could endanger public health—concerns now underscored by the devastation of COVID-19…”

Inside Clean Energy: Where Can We Put All Those Wind Turbines? Analysis from Inside Climate News: “…A lot is riding on how much development takes place. The researchers show that as wind power increases, electricity prices are likely to decrease because wind is one of the least expensive sources of electricity, even as restrictions on wind power possibly lead to higher prices. There also are regional differences among the scenarios. As restrictions increase, onshore wind farms would be more concentrated in the sparsely populated parts of the Mountain West and Southwest, and less likely to be in the Great Lakes, Southeast and other regions where cities are closer together. This concentration would lead to higher costs per unit of energy because the wind farms would need to deliver their electricity longer distances to get to population centers...”

Floating “Donut-Shaped” Eco-Hotel Powered by Clean Energy Planned for Qatar. The Daily Mail Online has the story: “A luxurious floating and rotating eco-hotel which generates its own electricity via solar, wind and tidal power is being developed by Qatar. The doughnut shaped building will use solar panels and wind turbines to produce clean energy with no waste – and a vortex shaped roof to collect rainwater for irrigating greenery. The circular 380,000 sq foot construction has a massive 7,500 sq foot lobby at its center, while around the perimeter are 152 rooms with private balconies overlooking the ocean. Views will change as the hotel slowly spins around, but as it will take 24 hours to complete a single rotation the movement will hardly be noticeable to guests…”

Happiest Country on Earth: Finland. BBC News breaks down the latest survey: “Finland has been named the happiest place in the world for a fourth year running, in an annual UN-sponsored report. The World Happiness Report saw Denmark in second place, then Switzerland, Iceland and the Netherlands. New Zealand was again the only non-European nation in the top 10. The UK fell from 13th to 17th place. Data from analytics researcher Gallup asked people in 149 countries to rate their own happiness. Measures including social support, personal freedom, gross domestic product (GDP) and levels of corruption were also factored in. The country deemed the most unhappy in the world was Afghanistan, followed by Lesotho, Botswana, Rwanda and Zimbabwe…”

March 23, 1966: A snowstorm brings a foot of snow to southern Minnesota.

Summer Could Last Half the Year by End of Century. NBC News explains the implications of new research and projections: “Summers in the Northern Hemisphere could last nearly six months by the year 2100 if global warming continues unchecked, according to a recent study that examined how climate change is affecting the pattern and duration of Earth’s seasons. The study, published last month in the journal Geophysical Research Letters, found that climate change is making summers hotter and longer, while shrinking the three other seasons. Scientists say the irregularities could have a range of serious implications, affecting human health and agriculture to the environment…”

Lumber Shortage Linked to Rapidly-Changing Climate. Quartz connects the dots: “Lumber is in such short supply in the US that its prices have skyrocketed to an all-time high—so much so that the expense of building the average single-family home has risen by $24,000 since last April to reflect the cost of wood. The reason, in significant part, is the changing climate—and how it enabled a beetle species to infest forests in the Canadian province of British Columbia years ago. The steep rise in lumber prices illustrates the uncommon nature of the pandemic economy: a seizing-up of supply, but a constant simmer of demand that is now exploding as countries re-open. In the US, since the spring of 2020, the price of lumber has risen by more than 180%, according to the National Association of Home Builders (NAHB)...”

Climate Change Fuels Drought Across US, Makes Everything Worse: Climate Nexus has headlines and links: “A mega-drought worsened by climate change is creating and exacerbating problems across the Western U.S. as NOAA predicts precipitation levels below historical norms through June. NOAA’s official spring outlook, released late last week, predicts expanding and worsening drought from Louisiana to Oregon and unusually warm temperatures in almost the entire country — which in turn make drought worse. “We are predicting prolonged and widespread drought,” National Weather Service Deputy Director Mary Erickson told the AP. “It’s definitely something we’re watching and very concerned about.” Shrinking snowpack means even less water will be available for everything from drinking water to hydropower to irrigation, and reservoirs such as Lakes Mead and Powell are already at below-normal levels. Climate change exacerbates drought in multiple ways, including by creating weather patterns that, “leav[e] the southwestern states mostly warm, dry, and prone to wildfires,’’ Jennifer Francis, a senior scientist at the Woodwell Climate Research Center, told Bloomberg.” (Drought: Bloomberg $; Spring outlook: AP, CNN, The Hill; Climate Signals background: Drought, Wildfires)

For These Young Evangelical Activists, Facing the Climate Crisis is An Act of Faith. Here’s a clip from a Rolling Stone story: “…This is my sacrament,” says Sarah Herring, 23, another YECA field organizer. “The environment is one of the most powerful tools, if not the most powerful tool of connecting with the creator. That’s why I’m so passionate about my activism.” Says Meyaard-Schaap, “We’re doing this not because we’re environmentalists, not because we’re Democrats or Republicans. We’re doing this because we’re Christians, because we’re trying to follow Jesus and we think this is part of what that means.” Finding that connection between faith and climate activism can be a painful process. The climate crisis is a source of deep anxiety for most anyone who has a passing understanding of its potential impact, but for many young evangelical activists, it also means confronting the fact that they were misinformed by people and institutions they loved and trusted…”

How Well Does the Media Cover the Climate Movement? Here’s an excerpt of a post at The Columbia Journalism Review: “…Media coverage of the climate crisis has long lagged behind warnings from scientists and other experts—especially in the US, where coverage was sporadic at best, and often descended into a scientifically indefensible bothsidesism that portrayed corporate flaks and real scientists as equally credible. Improved news coverage overlaps with the emergence of the youth climate movement: According to a 2020 analysis by the watchdog outfit Media Matters for America, the outpouring of climate activism in 2019—especially a global youth strike in September of that year, led by Thunberg and involving some 6 million people—was largely what finally shocked the media out of their collective climate silence. In other words, despite a wealth of evidence establishing climate change as a story of massive, global importance, many news organizations still needed to be led out of the darkness…”