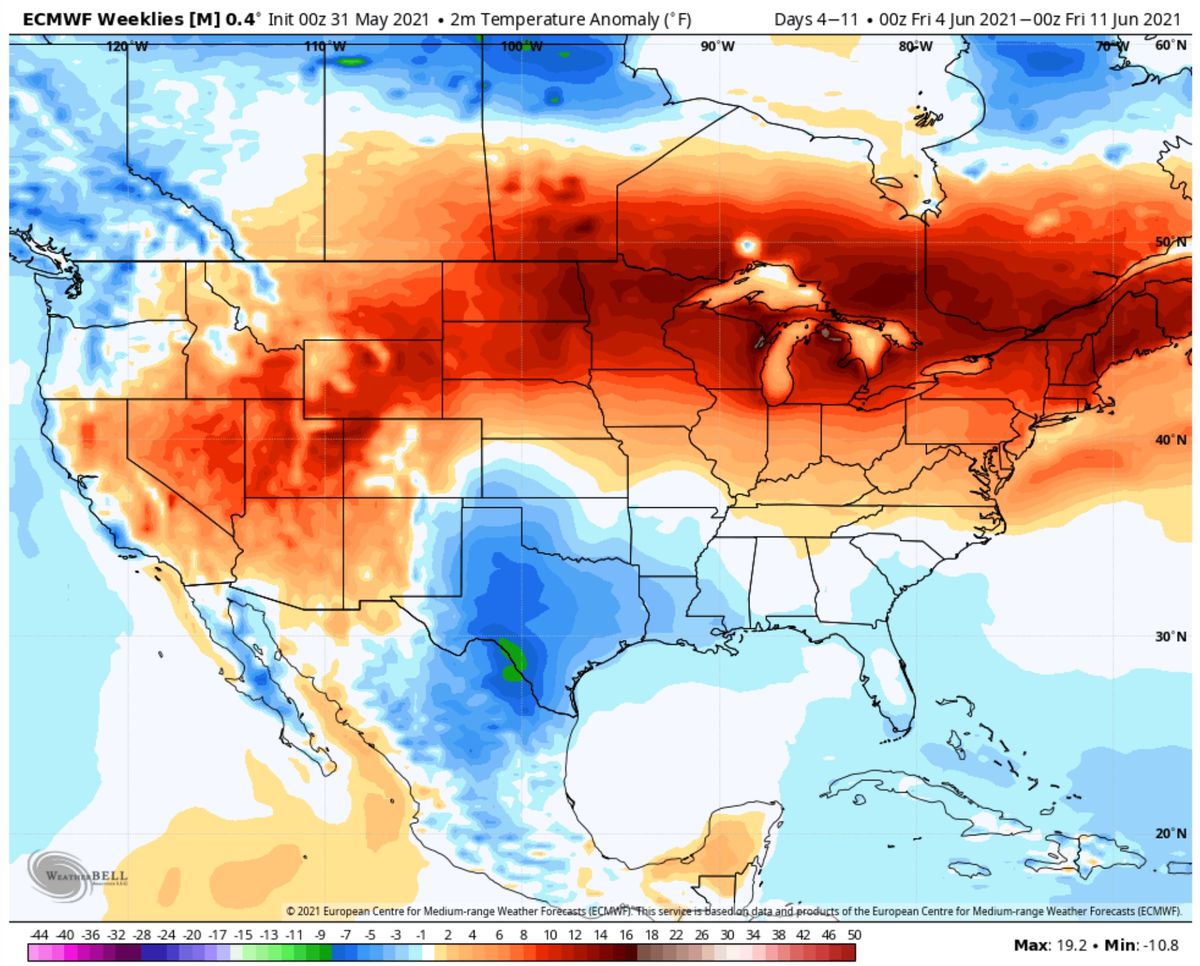 A July-Like Hot Front Is Shaping Up

I don’t mind the heat at all. Then again, I can go indoors and fall asleep in air conditioned comfort – or go jump in a lake, as I’m encouraged to do frequently.

Where can I enjoy the most extreme heat on Planet Earth? I sell my condo in Death Valley, California and purchase a cheap timeshare in Iran’s Lut Desert to experience otherworldly heat. A recent analysis of satellite data shows this salt desert in eastern Iran has seen temperatures as high as 177.4F, the hottest on the planet.

Note to self: great spot to open up a Dairy Queen.

Meteorological Summer kicked off yesterday, marking the 90 warmest days of the year, on average. That won’t be hard to believe, with temperatures surging above 90 from Friday into early next week. A few models predict mid to upper 90s, which seems like a stretch, but not out of the question.

June is, on average, the wettest month of the year across Minnesota. I see dry weather into the weekend, with random T-storms freckling the Doppler Radar next week.

Hoping for a real hot front? You’re in luck.

Hot Front. The rumors are true: we go from frost and freeze and flurries last week to 90s one week later. Hang on for dear life, because the Hot Weather Olympics are about to start up with a run of 90s from Friday into Sunday, possibly longer.

Dueling Models, Some Hotter Than Others. Will the Canadian GEM model verify with 97F predicted for the Twin Cities on Saturday? I’d give it a 1 in 3 chance, but I’m starting to think mid-90s for much of Minnesota Saturday afternoon. Real heat.

Persistently Sweaty. I see a heat bubble ridge of hot, high pressure building over much of the USA by mid-June, suggesting persistent heat and humidity for the nation, with the only possible relief coming for New England and the coastal Pacific Northwest.

Watching Choi-Wan, Also Known As Dante. Tropical Storm Choi-Wan, also known as Dante, is about to make landfall in northern portions of eastern Samar. The system is barely a tropical storm, with current winds of 40 mph. It is expected to remain at that strength through Wednesday Night before weakening into a Tropical Depression. The center of Dante – as well as the strongest winds – are expected to pass east of Manila. PAGASA is updating a tropical cyclone bulletin every few hours that is viewable here with more information: http://bagong.pagasa.dost.gov.ph/tropical-cyclone-bulletin-iframe

Heavy Rain Risk. Dante could bring a half a foot to a foot of rain to portions of the Philippines over the next couple of days. In the Manila region, rainfall amounts of at least 1-2” will be possible. Some of the heavy rain across the region could lead to flooding and landslides.

What is “Disaster Fatigue”? A post at Marketplace caught my eye; here’s an excerpt: “…There’s also a lot of disaster fatigue carrying into this season, said Samantha Montano at the Massachusetts Maritime Academy. That’s true particularly along the Gulf Coast, “where you have had multiple hurricanes, multiple flood events, winter storms, pandemic, a few tornadoes,” Montano said, all in the last year. “In talking with emergency managers, you can definitely sense the fatigue in having to go through this many disasters in such a short window of time.” With climate change making extreme weather more common, building the capacity of emergency management systems is critical, Montano said.”

Amazon to Help During Hurricane Season With Quick Delivery of Disaster Relief Supplies. Well, Amazon does have the logistics and shipping challenges figured out. Your move FEMA. CNN.com has details: “The 2021 Atlantic hurricane season officially begins today, and it is forecast to be yet another busy one. With an active season in mind, Amazon and the Red Cross are hoping a brand new disaster relief hub and partnership will allow for a faster response to locations hit by hurricanes and other natural disasters. “Our disaster relief and response team is partnering with global humanitarian relief organizations to leverage Amazon’s scale to help improve response time to large-scale natural disasters around the world,” Alicia Boler Davis, vice president of Global Customer Fulfillment at Amazon, said in a news release to CNN…”

Hurricane Special: National Storm Surge Forecast Model Updated, Increases Time Needed in Case of Evacuation. CBS Miami has news of upgraded storm surge predictions coming for the 2021 hurricane season; here’s an excerpt: “…There are parts of southern Dade, a storm surge can push inland 10 to 15 miles. Certainly, penetrate Cutler Ridge, get into the areas and suburbs behind it,” said Rhome Such a threat like this calls for action by the NHC to have a more accurate forecasting tool. The storm surge unit has upgraded its forecast model in time for the 2021 hurricane season. This new upgrade will not only provide a more precise storm surge forecast but also increase evacuation times by 12 hours. “Which doesn’t seem like a lot but when it comes to evacuation decision making and the ability to pack your house and evacuate, 12 hours is an eternity,” said Rhome. The updated model will also help with eliminating unnecessary evacuations because as Rhome explains, “If you don’t have to evacuate you’re probably exposing yourself to greater risk by evacuating…”

Derecho Season Is About to Begin. Capital Weather Gang puts these vast, sprawling and fickle wind storms into perspective: “…In some parts of the country, derechos occur on average more than once per year. In fact, parts of the Midwest and Heartland area are as prone to damaging derechos as Florida is to hurricanes. And with derechos, the footprint of hurricane-force winds can often be more geographically extensive than with a hurricane itself.Derechos feed on warm, humid air. They start as ordinary thunderstorms but tap into jet stream energy, quickly expanding and swelling into a lengthy band of storms resembling an archer’s bow. The storms take the shape of a backward-C, the middle of the line propelled outward by strong winds descending behind them. Winds often gust upward of 80 mph. According to the American Meteorological Society, derechos produce a swath of winds at least 60 miles wide and more than 400 miles long…”

How 5G May Improve Early Warnings of Severe Weather. The Wall Street Journal (paywall) has news of an interesting experiment, leveraging cellular technology: “In a small office across from a dry cleaner in Wake Forest, N.C., a team of engineers is exploring the possibility of using data found in 5G wireless signals to measure a key factor in the early detection of tornadoes. The group is part of a nonprofit test lab and engineering consulting firm called the Wireless Research Center, or WRC, which specializes in testing wireless technology and antennas. The team already has proved that humidity can be measured based on changes in signals that 4G and 5G cell towers emit. Now it wants to further test the technology to show that these same signals can help save lives by helping meteorologists forecast severe weather much sooner than current methods allow. Meteorologists typically use weather stations or satellites to measure humidity. Both methods have their limitations…”

10 Tips for Kids Interested in Weather. Yeah, the calculus nearly killed me. Dr. Marshall Shepherd has good advice in a post at Forbes; here’s an excerpt: “…I cannot tell you how many times a student walks into my office wanting to major in atmospheric sciences or meteorology because they are fascinated by storm chasing, hurricanes, or cloud formations. However, the conversation often takes a sharp turn when I lay out all of the required courses in calculus, differential equations, physics, thermodynamics, atmospheric physics, dynamics, statistics, and other subjects. Head this off by doing your absolute best in math and sciences classes now. I also challenge educators to make science and math fun and not just chalkboards and equations…”

Climate Change and Hurricanes. June 1 is the traditional start of the hurricane season, and although consistently warmer ocean water may not spawn more hurricanes, the storms that do develop have a better chance of rapid intensification. Here is an excerpt of a good overview of climate impacts from Climate Central:

Hurricanes Are Becoming More Dangerous. Here’s Why. An earlier CNN.com post describing how a warmer, wetter climate is spiking (some) hurricanes is timely; here’s an excerpt: “…If humans continue to emit heat-trapping gases into the atmosphere, scientists expect that sea levels will climb even higher, putting major cities at an even greater risk. Sea levels are now likely to rise more than 3 feet by 2100, according to the findings of a landmark report published last year by the UN’s Intergovernmental Panel on Climate Change. Generally speaking, a rise in sea levels of 2 to 3 feet would mean that a Category 1 hurricane could be capable of inflicting the kind of storm surge damage we would expect today from a Category 2 storm. In the Southeastern US alone, the annual cost of storm surge damage is projected to grow to $56 billion by 2050, according to the US government’s 2018 National Climate Assessment. And that’s even if global emissions of heat-trapping gases are moderately curbed in the next two decades…”

Three Exxon Refineries Top the List of U.S. Polluters. Details via Reuters: “Exxon Mobil’s U.S. oil refineries pump out far more lung-damaging soot than similarly-sized facilities operated by rivals, according to regulatory documents and a Reuters analysis of pollution test results. The Texas-based firm’s three largest refineries – two in Texas and one in Louisiana – are the nation’s top three emitters of small particulate matter, according to the analysis of the latest tests submitted to regulators by the nation’s 10 largest refineries. The three Exxon refineries together averaged emissions of 80 pounds per hour, eight times the average rate of the seven other refineries on the top-ten list, some of which are larger than Exxon’s plants, the analysis shows...”

Study Blames Climate Change for 37 percent of Heat Deaths Worldwide. NBC News has details: “More than one-third of the world’s heat deaths each year are due directly to global warming, according to the latest study to calculate the human cost of climate change. But scientists say that’s only a sliver of climate’s overall toll — even more people die from other extreme weather amplified by global warming such as storms, flooding and drought — and the heat death numbers will grow exponentially with rising temperatures. Dozens of researchers who looked at heat deaths in 732 cities around the globe from 1991 to 2018 calculated that 37 percent were caused by higher temperatures from human-caused warming, according to a study Monday in the journal Nature Climate Change…”

Where Wind and Solar Power Need to Grow for America to Meet Its Goals. Here’s the intro to a timely post at The New York Times (paywall): “President Biden has promised to sharply reduce America’s planet-warming carbon emissions, which means changes to the country’s energy system may reshape landscapes and coastlines around the country. The United States is now aiming to bring emissions down to net-zero by 2050, meaning the country would eliminate as much greenhouse gas as it emits. To reach that goal, Americans will need to get a lot more of their energy from renewable sources like wind and solar farms. One of the most recent studies on the subject, Princeton University’s Net-Zero America Report, charted five pathways to net-zero, and all of them required the United States to exceed the current pace of building for solar panels and wind turbines…”